LGBTQ coordinator vacancy to be filled 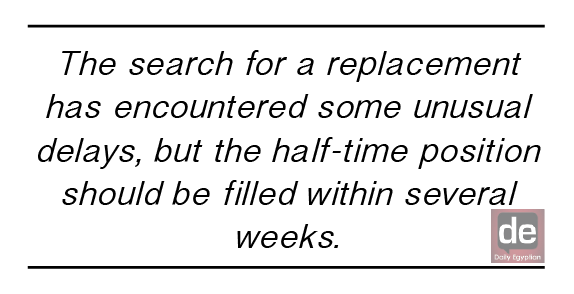 The LGBTQ — or lesbian, gay, bisexual, transgender and queer — Resource Center in the Center for Inclusive Excellence has been without a coordinator since Wendy Weinhold resigned on Aug. 1, 2014, causing concern within the community.

Nathan Stephens, director of the Center for Inclusive Excellence, said the search for a replacement has encountered some unusual delays, but the half-time position should be filled within several weeks.

The search began in August, but was discontinued for six months because Human Resources considered changing the position from an Administrative/Professional one to a classification Civil Service. If reclassified, the education prerequisites would be lowered to a high school diploma. An Administrative/Professional position demands a master’s degree.

This adjustment was not approved by everyone.

“While I can appreciate the intent, I did not believe this position was one that could be reclassified as such because of the requirements,” said Katie Sermersheim, interim dean of students.

The coordinator’s job responsibilities include management of the resource center, planning programs and events, providing supportive services for the LGBTQ community, training and supervising staff and several other obligations. Three to five years of experience in higher education is preferred.

“The process of providing information to Human Resources as support and justification for keeping the position as an A/P was lengthy and required several communications,” she said.

After the six month hiatus, the application deadline, originally meant to be Feb. 6, was extended to April 3 because of a mistake within the original advertisement.

The half-time position was listed under full time, and when corrected, several people withdrew their applications, forcing the position to be re-advertised. As of April 3, roughly 26 applicants have displayed interest, Stephens said.

The delay has had a negative impact on some in the LGBTQ community.

“The fact that we’ve gone this long without [a coordinator] is really upsetting,” said Sarah Mitchell, a former student worker at the LGBTQ Resource Center. “I feel like the school is not prioritizing it as much as they should be.”

Mitchell, a senior from Elmhurst studying journalism and cinema and photography, said she has known of several instances of queer-bashing on campus this year that were not addressed as efficiently as they should have been.

“It would have been handled a lot more swiftly if we had a coordinator whose primary focus was making sure things like that didn’t happen,” she said.

Stephens and Sermersheim said they were never approached with student concerns during this time. If they had, the situations would have been dealt with accordingly.

Another issue the LGBTQ community has with the search is the designation of the coordinator as a half-time job—the only such coordinator in the Center for Inclusive Excellence. The coordinators for the black, women’s and Hispanic/Latino resource centers are all full-time.

Jonathan Gray, head of the search committee for the coordinator of the LGBTQ Resource Center, said it is vital the position is expanded to full time. Regardless of potential budget cuts, the job expectations and the fact the center serves people from SIU, as well as all of southern Illinois, makes the switch justifiable.

“What the half-time position says to me is we’re not willing to put sufficient resources into meeting the needs of very vulnerable, very at-risk LGBTQ [members],” he said.

If the position were changed to full time, the annual salary would increase from roughly $20,000 to $40,000, Sermersheim said.

“I’m a member of the [LGBTQ] community, so I have a special place in my heart for a student who is struggling in the area of LGBTQ issues,” she said. “I would love to have a full-time coordinator.”

However, transitioning the position into full time is not a simple task. To prove that the additional money is needed, data displaying how the position has been used over time and how many people it has assisted must be presented to SIU’s administration.

“I think it needs to be changed, but it’s not about my opinion,” Stephens said. “My role is to supervise the position as it is and make suggestions.”

He said he is still trying to figure out the best way to express the need to the administration in quantifiable terms.

Getting an accurate population of the LGBTQ community goes beyond asking students if they identify as such, Gray said. Numbers are not always the most accurate way to go, because not all members are willing to disclose their involvement.

“LGBTQ identity can be invisible, fluid and one that many young adults are only now in the process of discovering,” he said. “We can’t just ask, ‘How many LGBTQ students are there at SIU?’ We’re never going to know the answer to that.”

He said statistical evidence of heightened depression, bullying, substance abuse and suicide rates are enough to prove why there needs to be clear, available and visible advocacy work on campus.

Stephens said although each group has a resource center to cater to a certain demographic, students are encouraged to use all centers.

Regardless of convergence between centers, having a full-time LGBTQ coordinator is something some students would like to see.

“A lot of people underestimate how much the resource center does for the LGBTQ populace in general,” said Christine Wolfersheim, a junior from Carbondale studying psychology. “Bringing someone in full time would bring more students to campus.”

The absence of a certain demographic in a resource center can make people feel isolated and alone, Gray said.

A lack of equal representation could lead to confusion and disappointment of future students about where SIU stands on LGBTQ issues.

“There’s a possibility that SIU has this reputation of being a great school for LGBTQ kids, and then it might not end up being like that for everyone,” Mitchell said.

For the time being, struggling LGBTQ students are encouraged to visit the Counseling Center or the Center for Inclusive Excellence and speak to the other coordinators available.

Jessica Brown can be reached a [email protected]