No one injured in fire that destroyed ‘Animal House’ 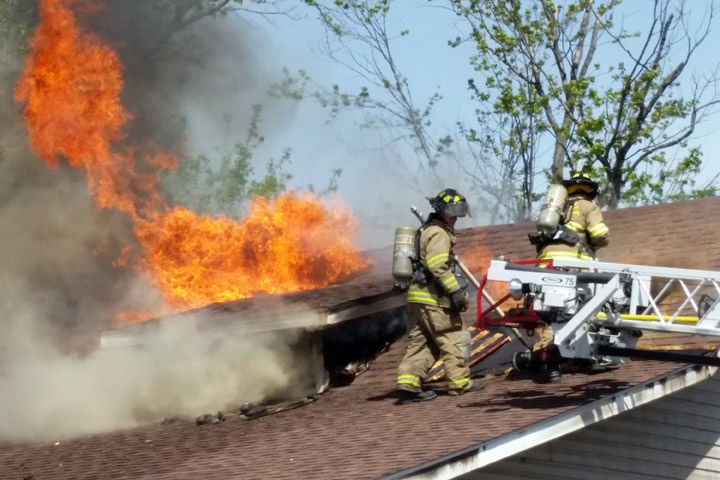 Residents of a West Hospital Drive home were alerted Sunday morning that their house was on fire — not by their fire alarms, but by the owner of the neighboring Dairy Queen.

Alexa Lyons, who lives in the house at 208 W. Hospital Drive said the building caught fire about 10 a.m. Sunday. She said the alarms in the structure did not go off until six people and a dog were evacuated from the home. Four SIU students live in the house, owned by Home Rentals.

There were also three students from different Chicago colleges visiting the home, named after the 1978 film “Animal House,” at the time of the blaze.

There is no estimated cost of damage and no injuries were reported by the students, said Doug Biggs, assistant Carbondale fire chief.

Biggs said one firefighter was taken to Memorial Hospital of Carbondale where she was treated for minor injuries and released.

At about 1 p.m., a gofundme.com donation campaign was started to raise money for the victims of the fire by SIU senior Dakota Serviss. It has been shared 136 times on social media and as of 10 p.m. Sunday, $2,370 was given by 22 donors.

Lyons, a sophomore from Chicago studying nutrition, said she and roommates Gianna Pavone, Dan Zeinz and Pat Fraze lost nearly all of their belongings.

“Me and Gianna were able to salvage some clothes but our laptops and everything else is gone,” she said. “The boys lost everything, even their cell phones.”

Lyons expressed her gratitude for the gofundme campaign in a text message.

“I’m so grateful for that,” she wrote. “I would’ve never thought so many be would be willing to help out like that.”

Lyons said Home Rentals has paid for a hotel room for the residents, but she chose to stay with friends. She said she is unsure whether or not her roommates have renter’s insurance but they will meet Monday with Home Rentals to sort out living arrangements.

Mark Waisukauski, owner of the Dairy Queen on the Strip, awoke the people sleeping in the home after an employee said she saw smoke.

“I went out there, saw that the house was on fire, went over to the house knocked on the door, told them to get out and called 911,” he said.

Waisukauski, who has owned the ice cream shop for 30 years, said the people escaped immediately.

Lyons said the fire alarms did not immediately go off because the fire started on the opposite side of the house.

“At first I didn’t feel like I was in danger, but I am grateful for what [Waisukauski] did,” she said.

Biggs said firefighters put out the fire, which started at the rear of the house, in an hour and a half but stayed on scene for about five hours.

Tyler Davis can be reached at [email protected]