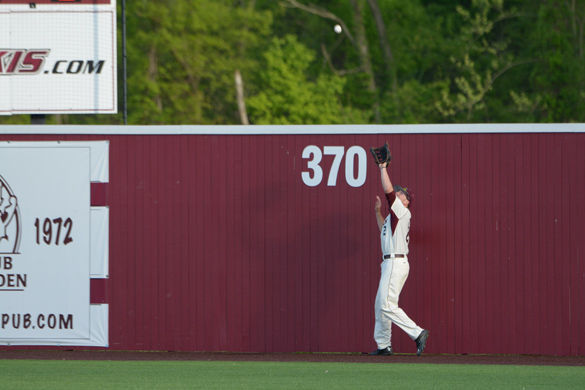 Illinois’ 18-game winning streak is the longest active in Division I baseball.

SIU coach Ken Henderson said his team’s offense was in a lull early.

“I thought we kind of sleepwalked through the first four innings,” Henderson said. “Once we woke up and got going, I thought we played really well from there.”

Saluki freshman shortstop Chase Slone put his team on the board with a 2-run double in the fifth inning.

SIU scored 3 runs — all on groundouts to second base — in the next 2 innings to cut the Illini lead to 7-5.

Sophomore reliever Jacob Williams kept the Salukis in the game with 2 no-hit innings in the seventh and eighth.

Illini junior reliever Nick Blackburn picked up his third save of the year, retiring both batters he faced.

Four Illinois hitters picked up 2 hits. Kerian and James led the Illini with 2 RBIs each.

With a strong orange-and-blue-clad showing on hand, Harrisburg natives Reid and Ryne Roper went a combined 1-for-7 for Illinois.

The Salukis travel to Evansville for a three-game series starting at 6 p.m. Friday at Braun Stadium.