The Daily Egyptian • May 5, 2015 • https://dailyegyptian.com/5239/news/islamic-state-group-claims-responsibility-for-texas-cartoon-attack/ 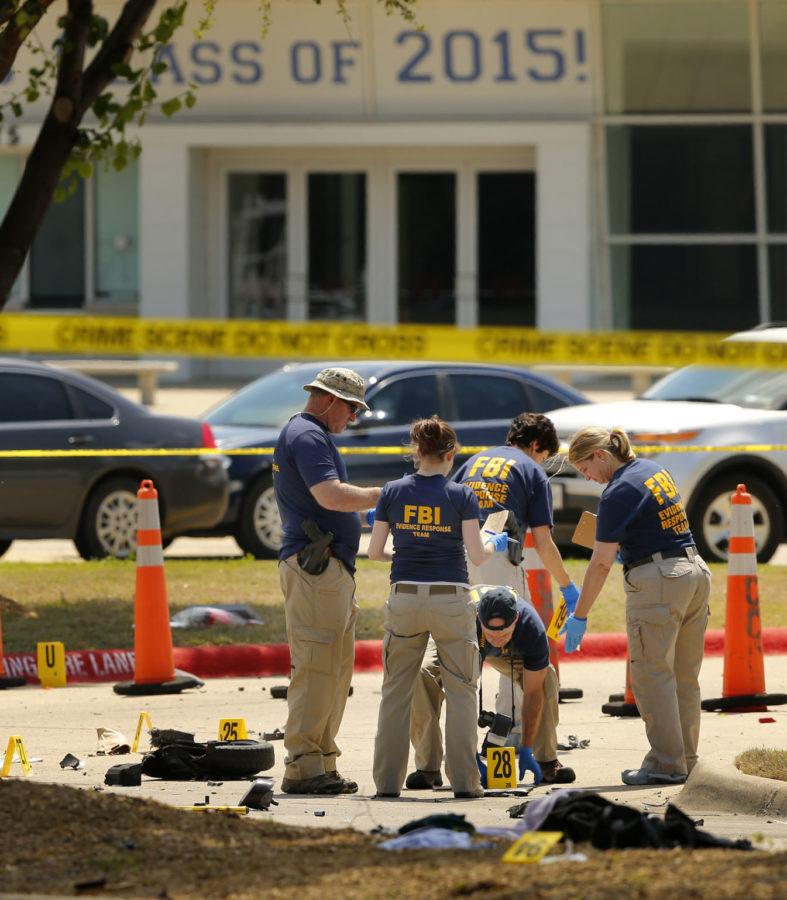 The Islamic State extremist group has claimed responsibility for Sunday night’s attack at a controversial cartoon contest in Garland, Texas, deepening the mystery about what drove two men to drive across two states and embark on a violent terror attack in a quiet Dallas suburb.

Islamic State had never before affiliated itself with an attack on U.S. soil – and the statement, issued Tuesday morning via the group’s Iraq-based radio station, Al Bayan, also raised questions over its influence far beyond its territory in Iraq and Syria.

The gunmen, who Islamic State referred to as “two soldiers from the caliphate,” had driven more than 1,000 miles from their home in Phoenix to Garland, where they opened fire outside the contest site, wounding a security guard before being shot dead by police.

Whether the militant group had any contact with the gunmen remains unclear, and the statement did not provide details about their relationship. “The coming ones are worse and more bitter, and you will see from the soldiers of the Islamic State what will hurt you,” the statement said. “Tomorrow comes soon to those who look for it.”

“At this point, this is still under investigation by the FBI and other members of the intelligence community to determine any ties or affiliations that these two individuals may have had with ISIL or other terrorist organizations around the world,” White House spokesman Josh Earnest said Tuesday. “So it’s too early to say at this point.

“The thing that we can say definitively is that, because of the quick and professional and brave work of local law enforcement officers, an attempted terrorist attack was foiled.”

Experts say Sunday’s shootout marked only the latest in a recent string of “lone wolf” terrorist attacks involving violent, unstable or otherwise radical individuals who pledge allegiance to extremist groups or ideologies, even in the absence of material support.

” ‘Soldiers from the caliphate’ could be interpreted to mean that they are fellow travelers, they share a common mindset, they’re all in it for the same cause,” said Daniel Benjamin, a former coordinator for counterterrorism at the U.S. State Department and currently a scholar at Dartmouth University. “Which is exactly how these lone wolves want to be thought of–as people who are part of the same historic movement as ISIS.”

Sunday night’s event was hosted by the American Freedom Defense Initiative, a New York-based group led by anti-Islamic political commentator Pamela Geller. The event offered a $10,000 prize for the top cartoon rendering of the Prophet Muhammad; images of the prophet are taboo throughout much of the Muslim world. About 200 people attended.

The two gunmen, Phoenix residents Elton Simpson and Nadir Soofi, stepped out of a vehicle at the Curtis Culwell Center in Garland, northeast of Dallas, early Sunday evening armed with assault rifles and wearing body armor. They shot a security guard in the leg before a traffic officer shot them both dead with his service pistol.

In September, amid ongoing airstrikes against Islamic State by a U.S.-led coalition, Islamic State spokesman Abu Mohammad Adnani called for group supporters to kill Australian, American, French and Canadian people “in any manner.”

“Smash his head with a rock, or slaughter him with a knife, or run him over with your car, or throw him down from a high place, or choke him, or poison him,” Adnani urged.

Over the past year, such calls have apparently precipitated so-called lone wolf attacks in Canada and Australia. In October, Canadian citizen Michael Zehaf-Bibeau killed a police officer near the country’s parliament in Ottawa before he was shot dead by security. Two months later, lone gunman Man Haron Monis held 18 people hostage at a cafe in downtown Sydney, precipitating a 16-hour siege.

The Garland attack “falls precisely at the intersection of two important trends,” Benjamin said. “Trend No. 1 is a high priority on combatting the insults to the prophet, insults to Islam. … The other trend is this perception that ISIS has achieved historic gains – that it’s holding territory, that it re-established the Caliphate. I think a lot of militants who were previously pretty dormant or subdued now feel like they have to get into the act.”

Lone wolf terror attacks before Islamic State rose to power, including the November 2009 shootings at the Fort Hood military post in Texas, a March 2011 shooting at the Frankfurt airport; and the May 2013 killing of British soldier Lee Rigby in London.

Yet perhaps the most deadly lone wolf killer in recent history was a far-right Christian – the Norwegian Anders Breivik, who killed 77 people in Oslo and the island of Utoeya in 2011.

The Texas attack was reminiscent to January’s shooting attack on the Paris headquarters of the satirical weekly magazine Charlie Hebdo in which 12 people died after publishing cartoons of Muhammad. The two gunmen in that assault, French-born Said and Cherif Kouachi, identified themselves as members of al-Qaida’s branch in Yemen, not Islamic State.

Anthony Cordesman, a security expert at the Center for Strategic and International Studies in Washington, D.C., said that material links between lone wolf terror suspects and the groups they support can be difficult to discern.

“The fact is, what you have not seen, in most cases, is a clear connection between affiliation and any substantive role on the part of ISIS from its headquarters in Syria,” he said.

“This creates a great deal of confusion, because people see ISIS central as expanding its role, whereas it’s simply expanding its affiliation. We get cases where people will affiliate themselves with ISIS, and somehow conclude the next week that al-Qaida or the Taliban is more attractive, and change.”