Professor fights to save sturgeon from extinction 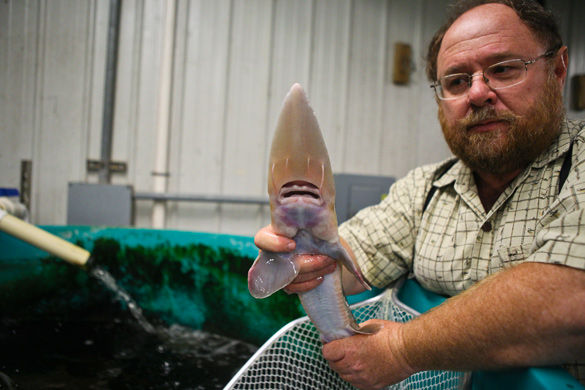 Finding a pallid sturgeon is like searching for a needle in a haystack.

Ed Heist, associate director of the Center for Fisheries, Aquaculture and Aquatic Science, is leading a genetic identification program on larval pallid sturgeon, which has been on the endangered species list since 1990.

Pallid sturgeon can grow between 30 and 60 inches long and weigh nearly 85 pounds. These prehistoric fish date back to the Cretaceous period, more than 75 million years ago. Their skin, more green and brown than the typical silver tinge of fish, is boney and platy, looking more gator than goldfish. Their long snout, with the mouth underneath, lets them feed on smaller fish along the bottom of rivers. The fish are native to the Missouri and Mississippi rivers, and over-harvesting for caviar and changes to their habitat have caused a drop in population.

Heist said the fish have always been rare, but human activity has lowered the population even more. Damming rivers into reservoirs within the last 80 years has decreased their chance for survival in the wild. To help restore the population, Heist said the U.S. Army Corps of Engineers has raised the fish in captivity and stocked rivers with them since they became endangered. Once they grow to finger-length size — about 6 months old — they have been found to survive. So, Heist’s lab is trying to find fish that have aged between birth and 6 months old for research and breeding.

Heist said wild adults have been found to be more than 50 years old, dating them back to when the dams were built during the 1950s and ’60s. The fish can live up to 100 years.

He said when the sturgeon spawn, the eggs sink down to the bottom of the river and sit there for a few days, before the larvae float up and ride hundreds of miles down the river. With more reservoirs being built, the larvae get stuck in the sedentary water and are buried under sediment.

To identify the exact species of sturgeon, Heist and his lab are performing genetic tests on small clips of the fish’s fin, about the size of the nail of a pinky finger.

Heist and his team look at genetic markers called micro-satellites, which are passed from parents to offspring, and are as specific as a human fingerprint. He said half of all tagged fish lose their tag when they reach maturity. If a fish was re-captured, the test is accurate enough to determine the sample is identical to a previously caught fish.

They compare the newly caught fish to the parents used for brood stock to find if the fish is the product of hatchery-raised fish, or one that reproduced in the wild. The wild fish are bred providing greater genetic variability for the next generation.

“You’re not going to get the same fingerprint by chance,” he said.

Kevin Kingsland, a doctoral candidate in zoology from Wyocena, Wis., said the testing they are doing is the same as what is used by a crime lab.

“The same micro-satellite analysis that we do on sturgeon is the same test they do on ‘The Maury Povich Show’ to find who the baby’s daddy is,” Kingsland said.

These tests are vital to differentiate the pallid sturgeon from another, similar fish. A cousin, the shovelnose sturgeon, looks similar to the pallid and is not as rare in the wild.

Heist said shovelnose sturgeon can be caught in the winter by anglers using night crawlers as bait.

Aside from their physical similarities, the two species have successfully bred together, creating hybrid sturgeons.

Kingsland said the two species were likely separated during the last glacial period, more than 10,000 years ago. He said there are 19 different markers on the fish’s genome to differentiate between a pallid and a shovelnose.

So far, among more than 1,000 larva samples, they have successfully identified three pallid sturgeon larvae.

Kingsland said he did not have any genetic experience before this project; he instead looked at behavioral patterns in fish.

When working on a literary review on sharks during his undergraduate degree, he used several papers written by Heist, who studied the conservation biology of sharks before sturgeon.

The sturgeon and shark are both ancient fish with skeletons made of cartilage, meaning they have no bones.

“These are primitive fish,” Heist said. “They are fish that have characteristics that evolved long before the bony fish. They are pretty unique, which gives them a high conservation value. We don’t want to lose something that unique.”

Kingsland said his interest in sharks grew after seeing “Jaws” for this first time and begin fishing. He still owns the first shark documentary he ever saw on VHS and keeps a few toys on his desk.

This year, larval sturgeon will be released in the wild for the first time to try and find where survivors are living.