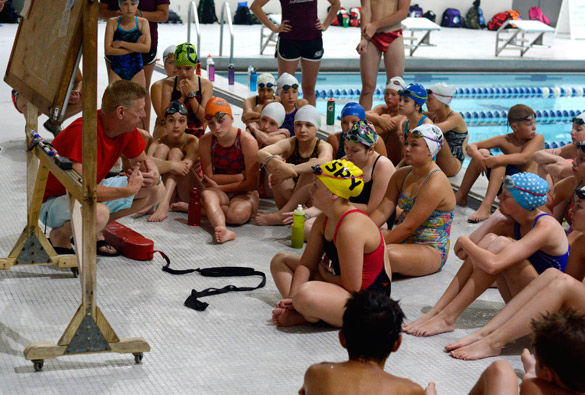 “[We want] to reinforce what they’re getting back home, but in a different way,” Walker said.

Many young swimmers are given instruction by coaches but do not understand why they are doing a certain exercise, he said.

“Most of the time, kids this age don’t know why they are doing [techniques], how to do them better and don’t know what to look for,” Walker said.

He said they try to educate the kids on different swimming exercises and why they are important for improvement.

“If you remember the set, there’s the benefit the next time you do it,” Walker said. “That way [campers] know how to motivate themselves with what they are doing.”

The camp, which began in 2007, is designed to help children ages 8 to 18 enhance their skills to compete at a higher level.

The Edward J. Shea Natatorium in the Recreation Center hosts the only Nike Swim Camp in Illinois, with children coming from as far as Chicago to attend. The price differs from state to state, as Nike sponsors many other camps nationwide, but the goals of focus and improvement remain constant.

Walker is assisted by camp counselors, some of whom are members of the SIU swim team and cycle in as they work around their previous summer commitments.

“It’s nice to let those kids have that experience,” Sara Nazari, a sophomore from Enid, Okla., studying psychology said. “I went to camp when I was a kid for seven years and that was my favorite part of the summer, so its more of a camp to have fun.”

The overall response from the campers and parents has been positive, so much so, that many campers return for another year, Walker said.

Madi Jager, 13 of New Lenox, along with her brother Will Jager, 12, are returning for their second year, and Madi Jager said she has already seen improvements.

Maggie Jager, their mother, said she has noticed big changes in her children’s techniques and overall skills. She said she commends Walker for paying attention to each of the campers equally and focusing on their individual needs.

“One thing that Will, my son, needed was some help with his butterfly stroke and you could see the difference between before and after [Walker] talked to him,” she said. “He kept with him, and it was really exciting to watch.”

While the camp emphasizes hard work, the reason for the season and the fun-fueled minds of the children are taken into account. Activities such as horseback riding and picnics are included throughout the week to award campers for their hard work.

“They’re kids and they like to have some fun,” Walker said. “We try and show them, if they put in the work, there is still time for fun.”

The campers swim from 8 to 11 a.m., followed by a lunch break, then resume swimming from 2 to 5 p.m. Some then retire to Neely Hall for the evening to get a taste of the dormitory experience.

The lunch breaks, activities and overnight stays not only allow the campers to unwind from their swimming routines but place an impression of campus in the back of their minds.

“We get a lot of kids who have been through the camp who may not progress in the sport, but remember the campus,” Walker said. “This is good exposure for SIU.”

With the amount of campers returning each year, it is not unlikely for them to become future Saluki swimmers down the line, he said.