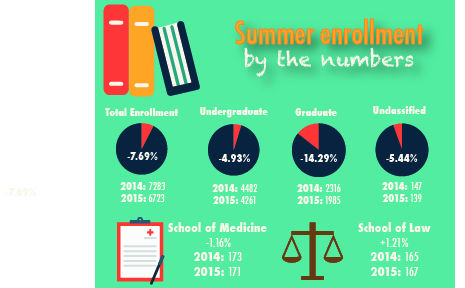 Summer enrollment at SIU has declined by nearly 8 percent from 2014 to 2015, equaling a total decrease of more than 550 students, according to University Communications.

Although the different reasons for the decrease are hard to place, the main reason is a shift to a new, experimental funding model established in 2014, Susan Ford, interim provost and vice chancellor for academic affairs, said.

The new model allows courses to be offered, as long as they generate enough tuition to cover instructional costs, as well as a 30 percent tax for central administration costs, she said.

Instructional costs include faculty costs, graduate assistant costs, instructional travel or travel for off-campus classes, all of which would return to the college.

The loophole in tuition costs is that not all students pay tuition. While some students are on scholarship and continuing their education, others decide to discontinue their education and payment all together, she said.

“That is tuition that we didn’t get, but a faculty member that had to be paid,” she said.

She said the previous summer budget would bolster the enrollment by allowing returning classes, but because of a smaller summer budget, the university has to adapt and drop classes that do not meet the new model’s standards.

She said while the previous business model was consistent, large improvements throughout the school had to be taken into consideration.

“You knew year to year you’re going to the same thing the year before,” she said. “But it did mean there was no room for growth, innovation, or chasing students needs through changes in the summer schedule.”

While this new business model utilizes a temporary loss to provide long-term upward potential, the town surrounding the university may suffer the same temporary decline.

“The university and university enrollment is the economic engine that drives not only Carbondale, but most of our region,” Les O’Dell, executive director of the Carbondale Chamber of Commerce said.

Promoting enrollment is something the Chamber of Commerce and small businesses have been very involved with, creating street-side advertisements to printing paw prints on the streets, which the chamber prints, O’Dell said.

“We want a thriving and vibrant university,” he said.

Other than bars and food located on the Route 51 strip, retail remains the next prosperous business in Carbondale, which is directly affected by college students, he said.

“They buy everything from dishes, to clothes to charcoal. Its everything,” he said. “There is not a segment of our business community that is not effected by the university.”