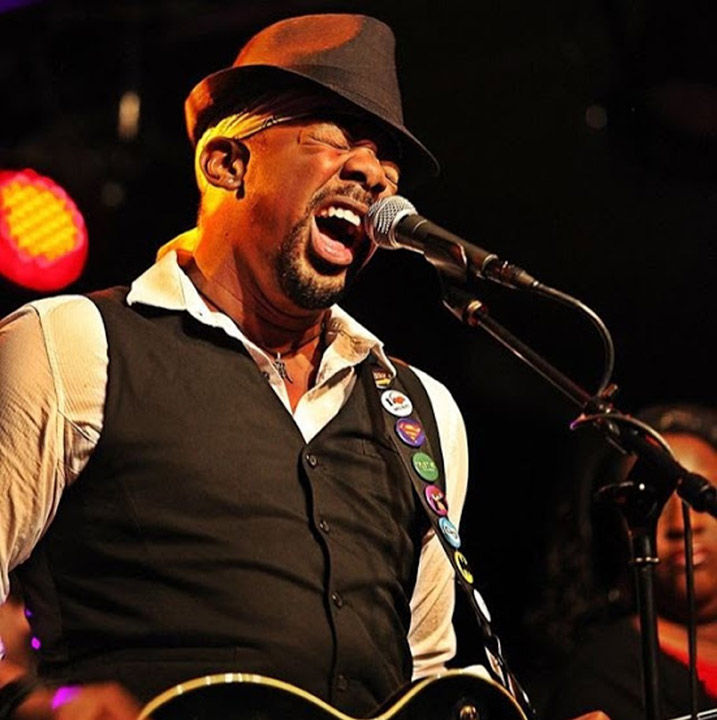 Michigan’s very own Chris Canas, also known as Christopher Lenard Cottingham, will be bringing his homegrown blend of gritty blues guitar and jazz influenced vocals to the Sunset Concert Series at 7 p.m. Thursday at Turley Park.

Ever since he picked up an old two-string bass out of his grandmother’s garage, he has been fascinated by blues music, playing various instruments and finding his true passion on the six-string guitar.

His band consists of Canas on guitar and vocals, Kevin Schoepke on bass, Michael Scott on drums, Chris Nordman on piano and Canas’ mother, Angela Cottingham, on vocals and percussion.

The Daily Egyptian spoke with Canas about his blues-infused journey up until this point.

What was the deciding factor in transitioning from a solo act to a full band?

Well, I wrote my first album when I was 15 or 16 and I didn’t have a band then. I just played every instrument and recorded it track by track. I had been going to blues jams since I was about 15 or 16, and we would just play and there came a time where I would sit in with other people’s bands. I joined the Detroit Blues Society, specifically the competition, in 2003, but I didn’t have a band so I thought I better get a couple people together. Since I was going to jams for two or three years, I met people there and I was like, “yeah, at least do the competition with me,” and it just went from there.

Is there something that makes the Detroit blues different than other locations?

It’s kind of hard to describe because everyone has a distinct sound. There’s the Chicago sound, the Memphis sound and, of course, the Mississippi blues, but I think Detroit has a different texture. To me it just feels bouncier. It has a little bit of that Motown flavor infused in it, so the singing is a little different and the progressions we do are a little different as well. I would say it’s on the funkier side.

What made the guitar stand out and become your favorite instrument?

When I was in 6th grade, I was playing classical trumpet and my instructor was always like, “You’re putting a little too much in there. It’s classical music, it’s not funky.” I was always drawn to the jazzier side of things, so then he put me in jazz band and we had a guitar there. I thought that was cool, but I never thought I could play guitar or anything like that. It took hearing B.B. King in my uncle’s T-top Camaro, which had a really good sound system with a lot of bass in there. Once I heard that, I felt I could express myself more with bass than this and that. Bass was my first love.

Would you say B.B. King was one of your greatest inspirations?

There are so many. I mean it started with B.B. and then it progressed into Stevie Ray Vaughn and Albert King and all the blues cats. As I started getting older and listening to more music, it meshed into like Jonny Lang. Jonny Lang was a big one. I think he was a teenager around the same time I was learning guitar. Prince is probably my biggest influence though. Mostly Prince. The blues is with B.B. and those guys, but Prince plays everything.

How is the onstage dynamic between members of the band?

Personally, I think, it’s one-of-a-kind because my mother is in the band too, so you can’t find that kind of connection when somebody already knows what you’re going to do. That’s the connection that all the guys are at now. Kevin, the bass player, has been here for 10 or 11 years and Michael and Chris are new additions, but its very hard to find musicians that are like-minded, don’t smoke, don’t drink and don’t do all kinds of craziness. We’re all for the music. We’re all on the same page. A lot of times, they’ll already know what I’m going to do. It’s so weird that we’re so close and so tight-knit like a family, that we’re just like, “Oh, he’s going to do this.” Sometimes I catch them off guard and they’re like, “What?” But that’s the fun part. It’s just extremely dynamic.