Starting kicker job up for grabs 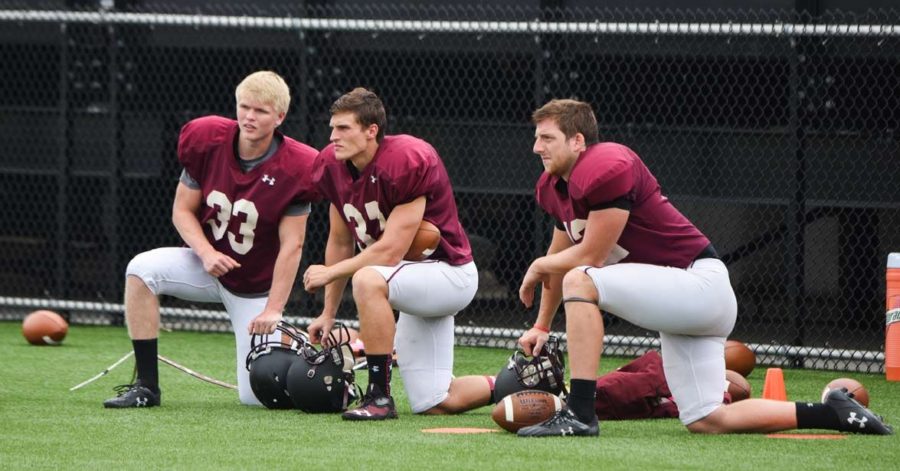 After having the same starter for every game at kicker last season, SIU football has three potential candidates to take the job.

Kickers Chris Adams and Austin Johnson are the favorites as the starting kicker.

Johnson said the competition feels neck and neck at this point in camp.

“I’ve never seen [Adams] hit the ball so well,” Johnson said. “[We] have been trading back and forth, with minimal misses. It is so close right now, it’s hard to tell.”

Thomas Kinney started every game at kicker the last two seasons before graduating. Last year, he converted all 41 of his extra points and averaged 62.8 yards per kickoff.

However, his field goal percentage dipped from 75 percent as a junior to 53 percent last season. Both Johnson — who was the starter during part of his freshman year before Kinney took over — and Adams worked away from SIU during the offseason to improve on field goal kicking.

Adams, a senior, worked with Kinney during the offseason to improve the height of his field goal kicks. Johnson, a junior, spent his offseason working with Jamie Kohl — who runs the Kohl’s Professional Camps for kicking, punting and snapping — on the height and distance of his kicks.

The Salukis do not have a coach specifically for kickers. Coach Dale Lennon reserves the responsibility for himself.

“Nobody talks to the kickers but me,” Lennon said. “When kickers get too much input, some of it might be negative, so it’s just a lot easier when all that input is coming from one person.”

Freshman Josh Haynes, the other kicker on the Saluki roster, could also earn the job. Johnson said that does not prevent him and Adams from trying to help Haynes reach his full potential.

“The kid’s got a natural leg on him,” Johnson said. “So we’re just trying to refine him so that when we do leave, we leave with [the team] in good hands.”

Lennon said no starters will be announced until the week of SIU’s first game.