University of Illinois endures a summer of scandals 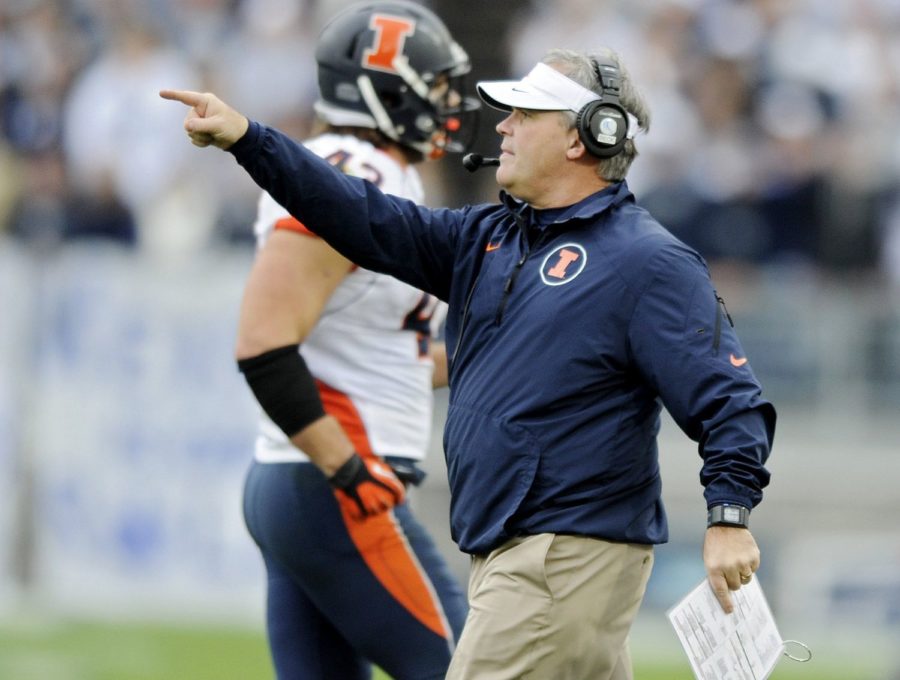 As far as summers go, the University of Illinois at Urbana-Champaign could not have seen much worse.

A former soccer player stung the university with a lawsuit claiming that the athletic department mishandled her concussions. Seven former members of the women’s basketball team alleged that coaches engaged in racial discrimination in a $10 million federal lawsuit.

And Friday — just one week before the Illini football season opener — the university fired coach Tim Beckman for discouraging injured athletes from seeking medical treatment so they could keep playing, a charge he strenuously denied.

The persistent scandals, not surprisingly, have taken a toll on the state’s flagship university and have stolen some of the spotlight from President Timothy Killeen, who took over in May with a pledge to protect U. of I.’s reputation at all costs.

A spokesman said it may be “a few weeks” before Killeen publicly addresses the recent tumult, a silence that suggests he wants to distance himself from it. It is the rare university that goes too long without some controversy, and school supporters and higher education experts predict the campus can move quickly past the recent embarrassments.

But as the state’s flagship university, the public will want to see corrective efforts.

“I don’t see five years down the road it having an adverse impact on the university’s image,” said James Montgomery, the longest-serving member on the school’s board of trustees. “I think it will pass with time. The public and the academic community have an understanding how these things sometimes occur.”

To smooth the upheaval, though, the university will have to be transparent about past mistakes, as it did with its preliminary findings in the Beckman investigation, said Teresa Valerio Parrot, principal at Colorado-based TVP Communications and a leading expert in higher education marketing.

She also believes the university made the right decision when it voluntarily released emails that it suggested Wise intentionally tried to keep from the public.

“Right now, they’ll be asking for the public’s understanding and patience,” Parrot said. “And the public will give it to them because of the university’s strong reputation. But that patience can only last so long and only go so far. People expect to see change and they expect to see leadership.”

The university’s horrific summer dates to May 10, when former Illini offensive lineman Simon Cvijanovic accused Beckman of mistreating players. Cvijanovic lashed out at Beckman on Twitter and in an interview with the Tribune, alleging Beckman forced him to practice and play games through injuries, essentially bullying him off the team.

After Thomas said his own internal review found no wrongdoing, the university hired an outside investigator to look into the allegations. A month later, former women’s soccer player Casey Conine filed a lawsuit claiming the school ruined her career after the team ignored university guidelines for treating concussions.

While dealing with football and soccer controversies, the university was hit with a $10 million federal lawsuit accusing the women’s basketball program of discriminating against black players. The suit, filed last month, alleges that coaches deliberately wanted to decrease the number of African-American players on the team.

In addition, the complaint alleges that coaches held segregated practices, prohibited white players from rooming with black players and described black players as “ghetto.” The university has said that investigators cleared coach Matt Bollant of any wrongdoing, though their report recommended the university clarify expectations for coaches’ conduct.

Beckman was fired after a separate, university-funded investigation confirmed allegations involving the football program, which has gone an anemic 12-25 during his three seasons as head coach.

According to preliminary findings released Friday, Beckman discouraged athletes from reporting injuries and, in a move the university said was inappropriate, pressured some players to give up scholarships.

Barmak Nassirian, director of policy for the nonprofit American Association of State Colleges and Universities in Washington, D.C., applauded the swift action taken against Beckman. He said self-examination and confronting problems without being defensive is key to maintaining the school’s credibility.

“In this case, they’ve taken action. This isn’t happy news — certainly a week before the first game is not the best time to get rid of the head coach — but the point is they did not engage in typical bureaucratic behavior of studied ignorance,” he said. “They did not bury their heads in the sand when they found a problem. They showed enough curiosity to want to know what was going on. To me, in some ways, that speaks to the strength of the institution as opposed to its weakness.”

The university’s leadership, though, remains uncertain following Wise’s resignation earlier this month. Wise stepped down after an internal investigation found that she was using a private email account in attempt to circumvent state public records law.

Killeen initially negotiated a severance deal with Wise that included a $400,000 bonus but reneged on that payment after criticism from Gov. Bruce Rauner and other lawmakers. The university instead opted to begin termination proceedings against Wise, who then decided to forgo the money and return to a tenured teaching position on campus.

Provost Ilesanmi Adesida, who was on many of the emails, announced his resignation last week.

“I don’t know if this is a problem at more universities and we just haven’t heard about it, but for a university of our caliber, it is quite frankly unacceptable,” said Elizabeth Diamond, a senior studying speech and hearing science.

Although the headlines are troubling, former board Chairman Christopher Kennedy said the university’s heart — the students, professors, deans and other department heads — is more than capable of withstanding the controversies.

“The great lesson of the last few years is that the critical leadership of the university is the deans and the department heads,” Kennedy said. “We’ve survived the loss of chancellors and provosts before, and we’ll do it again.”

Trustees have appointed Barbara Wilson, dean of the university’s College of Liberal Arts and Sciences, as the campus’ acting interim chancellor. She has vowed to help the school move forward — a change that officials say is necessary but rarely simple.

“These are challenging times for the university and she has my empathy,” he said. “However, I’m very confident that this fine institution will not just endure but flourish, and it will happen one decision at a time, over time.”