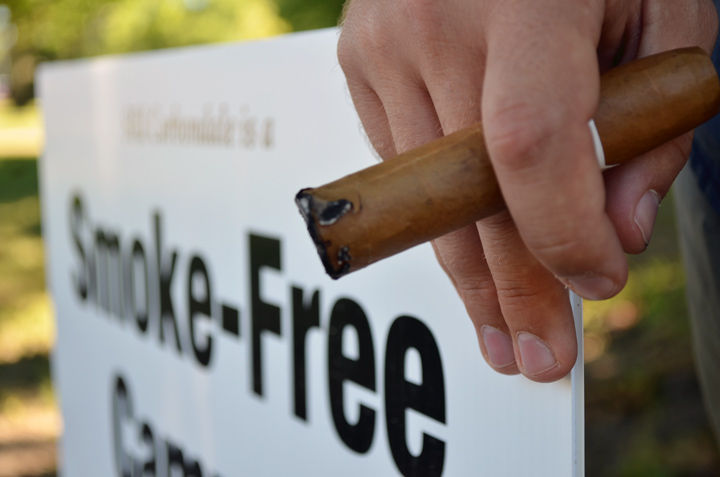 Students on campus this fall will be able to breathe easier now that the university has a campus-wide no smoking policy.

The new policy went into effect on July 1 in accordance to the Illinois Smoke-Free Campus Act, signed by former Gov. Pat Quinn last year. This legislation requires all state public universities to enforce no smoking policies on their campuses.

University Spokeswoman Rae Goldsmith said SIU wants students and faculty members to be mindful of the effects of smoking on themselves and the environment.

“SIU is focused on the health and well-being of its students and staff,” Goldsmith said.

Those who use e-cigarettes and vape pens will have no such luck either, as those are also banned under the new policies.

Kyle Dye, a sophomore from Hume studying crop and soil sciences, said he has not smoked or chewed tobacco in roughly a year, and the ban of vapor smoke promotes tobacco use since people will find other ways to get nicotine, unless they choose to break the rules.

“I thought about it,” he said.

Although the ban covers all of campus — including parking lots — students and faculty members can smoke in their personal vehicles while on university grounds. There will be no designated smoking areas on campus.

Dye understands the ban, because second-hand smoke and the litter from cigarette butts is a problem, but thinks there should be an area for smokers.

“It doesn’t have to be huge,” Dye said. “It can be a park bench. From my personal experience, I had an officer run up to me and he said, ‘I’m not your dad. I’m not going to tell you what to do. Plus I have better things to worry about than you guys vaping or smoking.'”

However, some are in favor of the rule.

Alicia Stark, an undecided freshman from Springfield, said she believes the policies will be good for campus.

“The university’s new policy will help to clean up the campus’ ground and air.”

Even though smoking is now against campus rules, smokers may not see effects of the policy because of a lack of enforcement.

There are currently no plans to actively enforce the ban by university officials. Goldsmith said there could be fines passed down to smokers in the future if they are seen as repeat offenders of the new policy.

Goldsmith believes the smoking ban will be a successful one, as there have been no major complaints.

Students offended by the smell of smoke should politely ask the person using prohibited products to stop or report the incident to the Department of Public Safety.

Students and faculty members trying to quit smoking and would like help from the university can enroll in smoking cessation programs offered by Student Health Services. Those wishing for more discreet options on quitting can call 1-800-QUIT-NOW, which offers smoking cessation information and a 20 minute counseling session.

More information about the new smoking policy can be found at http://www.smokefree.siu.edu/

Aaron Graff contributed to this story.