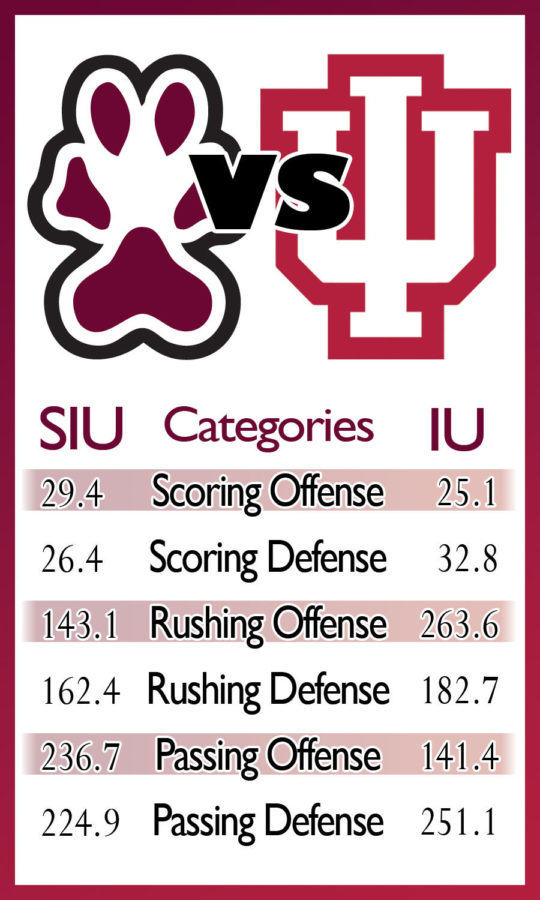 SIU is coming off a 6-6 season in which it posted a 3-5 Missouri Valley Football Conference record. Indiana went 4-8 and 1-7 in the Big Ten.

“This is always an extremely exciting time for a football coach and a football team,” Lennon said. “That first game week of the season, all that hard work that you put in during the offseason, that anticipation, everything is there.”

Both teams lost significant portions of their offenses from 2014.

Tevin Coleman, second-leading rusher in the FBS with 2,036 yards last season, left the Hoosiers after his junior year for the NFL. Coleman accounted for nearly 45 percent of the Hoosiers’ total offense last year.

Coleman was drafted No. 73 overall by the Atlanta Falcons.

The Salukis also lost their top three receivers, including MyCole Pruitt, the MVFC record holder for career receptions and touchdowns by a tight end.

Pruitt was drafted No. 143 overall by the Minnesota Vikings.

The Salukis will turn to senior tight ends Adam Fuehne and Josh Skadeland and a committee of inexperienced receivers to replace the production lost in the passing game.

Sudfeld will face two cornerbacks making their first collegiate starts at the position. Sophomore Ryan Neal is making the transition from safety. True freshman Torian Lewis and redshirt freshman Jefferson Vea will see action opposite him.

SIU won the only meeting between the two teams, a 35-28 contest in Bloomington in 2006. Co-offensive coordinator Nick Hill was the Salukis’ starting quarterback that day.

Lennon said the coaches would not focus on that game in preparation for this year’s matchup.

“We’re not going to use that as a theme, but it is something everyone is aware of, especially when you have coach Hill as a coach,” Lennon said. “It’s a big moment in Saluki football history; but at the same time, we’re going to focus on making our own history.”

Indiana has won seven straight games against FCS schools since that 2006 game.

SIU has lost its last seven games against FBS schools.