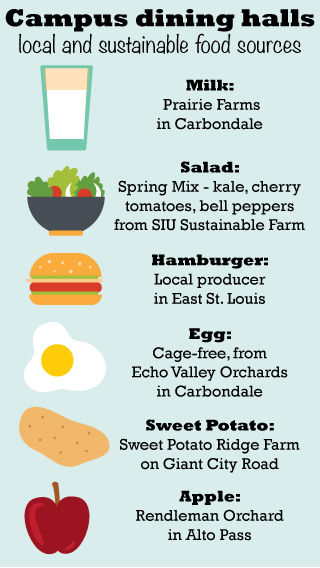 SIUC is working to raise local consumption by bringing in more food from the area to the dining halls.

“Studies show that most food we eat travels 1,800 miles from the field to the fork,” Duram said. “That has a huge impact — from [carbon dioxide] emissions, from transportation and everything that has to occur to bring it that distance.”

“We came together to figure out what we could do to promote local food within the state,” Duram said.

The act includes an initiative to have areas of state-provided food service, such as the university, purchase 20 percent of their food locally by 2020.

William Connors, executive chef for University Housing, has been in charge of menu developments, quality control and sustainability initiatives in the dining halls for the past 20 years. He was also a member of the task force.

In time, Connors has worked with the university’s sustainability department to improve the dining halls.

“We were doing it before it was cool,” Connors said of the university implementing sustainable practices on campus.

In fall 2008, Connors helped eliminate trays, which saves approximately 134,000 gallons of water and 66,000 pounds of food annually, from the dining halls, which reduces the number of dirty dishes and how much food students can take at once. The green initiative, Connors said, continues to reduce water, chemical use and food waste.

Connors, along with students and faculty from geography and agriculture started a sustainable garden in 2009 after a group of students from the geography department proposed the dining halls serve organic vegetables.

The SIU Sustainable Farm, located on Pleasant Hill Road, began as four 4-by-8 foot beds and has expanded to cover almost three acres.

The Green Fee, included in student fees every semester, partially funds the farm, and some of the kale, cherry tomatoes, squash and bell peppers grown there are used in the dining halls.

Connors said he continues considering ways to purchase and serve more food from closer to home.

“It would take growers willing to grow large amounts of [food] for us,” Connors said. “We don’t have that going on yet.”

Despite this limitation, Connors is still working toward the 20 percent by 2020 goal. He said there is a plan in place to track local and sustainable food brought into the dining halls.

Connors said at one point, about 24 to 25 percent of the food served was local. These percentages have lowered to the current 15 to 17 percent.

Connors said because of budget restraints, SIUC policy does not allow the purchase of local food more expensive than what they can purchase through US Foods, the food distribution company the university uses. If the university were to buy raised vegetables just from local vendors, he said it would cost 20 to 40 percent more than using US Foods.

However, Connors is aware of which companies are local and is mindful of sustainability when purchasing food because students should care where their food comes from.

For example, the milk served in the dining halls is from Prairie Farms in Carbondale. The sweet potatoes are from a local farmer, and the eggs, now cage-free, are produced by a local Amish farm.

In addition to being healthier and more flavorful than other options, Kurtzhals said, “eating locally exemplifies the three pillars of sustainability — social, environmental and economic concern.”

By the end of this year, Connors said he would like to see more sustainable agriculture influencing the dining hall.

“We have a lot of [items] on the menu that are sustainably oriented, but not necessarily sustainably grown,” Connors said.

In the future, Connors is also adjusting toward zero waste in dining halls, which already recycles paper, cardboard, canned goods and some plastic.

“What it comes down to is the future of the world,” Connors said.

Anna Spoerre can be reached at [email protected] or @ASpoerre_DE