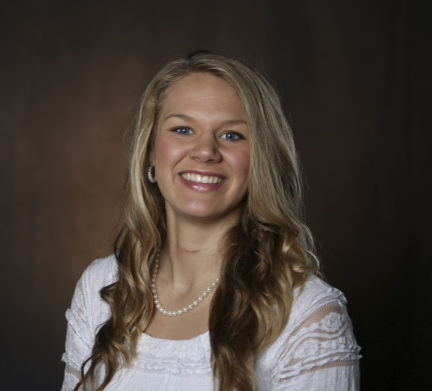 Savannah McCord, a senior from St. Louis, knew she was nominated as SIU’s 2015 Lincoln Academy student laureate before the expected announcement on Oct. 23. But on that day, after a week of nervous anticipation, she was ready to accept any outcome, so long as it came soon.

Every year the Lincoln Academy honors one student from each of Illinois’ universities and community colleges for outstanding academic excellence and leadership with the prestigious Abraham Lincoln Civic Engagement Award. For McCord, it was an honor just to be nominated.

“That whole week I was like, ‘When am I going to find out?'” she said.

McCord was sitting next to her best friend Deanna Price in Lawson Hall after class when she received an e-mail from the office of interim Chancellor Brad Colwell. She read all the way up to the word “congratulations” before she started crying.

“I didn’t know whether to go run five miles out of excitement, or stop and call everybody,” McCord said, cheerfully recalling the memory.

McCord did not go out and run five miles. Instead, she bought thank-you notes for all of the people she said helped her along the way, many of them being mentors and professors who had been strong, professional role models for the 21-year-old scholar.

McCord will be presented with an official medallion, receive a $1,000 grant and meet Gov. Bruce Rauner in the Hall of Representatives during the Student Laureate Convocation at the Old State Capitol in Springfield on Nov. 7.

“I felt like [receiving the award] took everything that I had done here and brought it to life,” McCord said.

A dual degree-seeking student in psychology and business, McCord has received honors from both the College of Business and the College of Liberal Arts, participated in undergraduate research projects and worked as a resident assistant at Neely Hall and the Wall & Grand Apartments, among a plethora of other achievements.

She even got her first and last ‘B’ here — the only tarnish on her 3.97 grade point average — courtesy of her Computer Information Systems class.

McCord chalks it up to being “technologically challenged.”

But she’s best known as a feature twirler for the Marching Salukis, and attributes much of her success to the lessons she has learned from it.

McCord was just 5 years old when she picked up her first baton. What began as childhood curiosity became an obsession, and she’s been doing it for the last 16 years.

“It’s always been a reminder to me to put my 100 percent effort into everything; put my heart and soul into everything that I do, and I’ve done that since I was little,” McCord said.

And the graceful juggling act she performs on Saturdays when the Dawgs play serves as a metaphor for the way she continues to live her life.

“The more I try to fight my batons the worse I end up twirling, but the more I just kind of ‘roll with it’ — literally — it serves me a lot better,” McCord said.

She is scheduled to graduate with honors in May and plans to head back to St. Louis when she’s done.

McCord is not entirely sure what she will do after graduation. There was talk of grad school. Something with human resources law, maybe. But no matter what she ends up doing for a living, McCord said she wants to continue to work toward helping others in her community.

“Anything is possible,” she said.

Bill Lukitsch can be contacted at [email protected] or on Twitter @Bill_LukitschDE .