Iannotti named finalist for Offensive Player of the Year 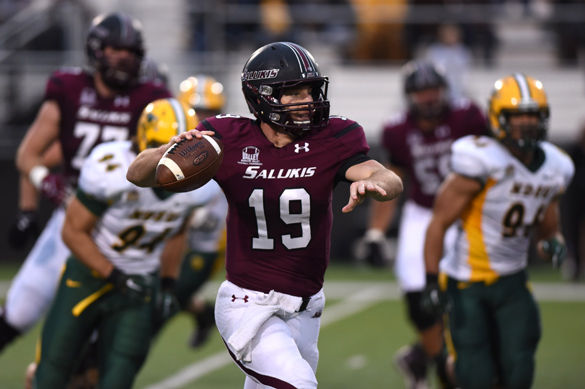 Iannotti is one of 25 finalists for the award and the eighth in 12 years for SIU. Former tight end MyCole Pruitt was a finalist last season. Arkee Whitlock and Deji Karim both finished third in 2006 and 2009, respectively, the highest finish all time for a Saluki.

Iannotti needs 345 passing yards against Northern Iowa on Saturday to break the single-season SIU record for passing yards, also set by Hill in 2007 with 3,175.

Iannotti also set SIU and FCS records during Saturday’s 42-21 loss to Illinois State. He broke SIU’s single-game record for passes completed with 42 and passes attempted with 63. His 423 total yards of offense is fourth in SIU history. He now has three of the top four spots, all set this season. Iannotti also set an FCS record with 36 total offensive plays as an individual during the fourth quarter.

Voting will be next week and the award winner will be announced Jan. 8, 2016 in Frisco, Texas, at the STATS FCS Awards Banquet. The award is voted on by more than 150 sports information and media relations directors, broadcasters and writers.