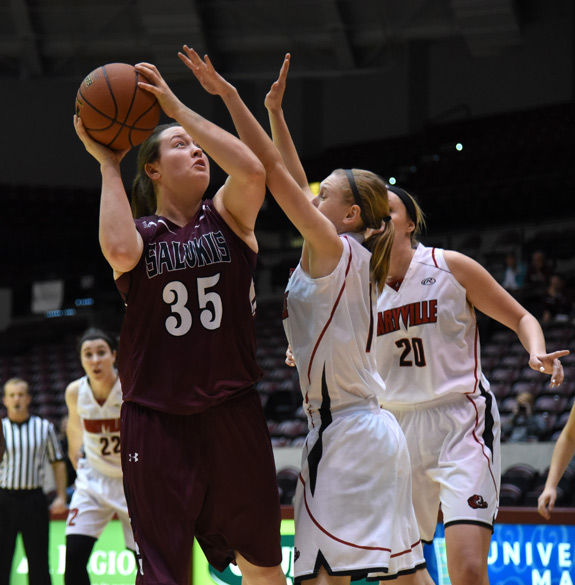 In the wake of senior forwards missing time early in the season, sophomore forward Celina VanHyfte could receive more playing time in the early games of the season.

VanHyfte finished with nine rebounds and shot 60 percent from the floor in 24 minutes against Maryville in place of the seniors.

Coach Cindy Stein said VanHyfte needs to improve on her mental lapses to have more playing time this season.

“Right now she has a tough time stopping Dyana in practice,” she said. “But she is very persistent and a hard worker, so the day Celina finally does stop her, I’ll be very happy.”

Stein complimented VanHyfte at the women’s basketball media day on Oct. 20. She said on some days the sophomore could be one of the best players in the conference.

“She just has a feel for the game where she rebounds and shoots the ball really well and has a better sense of what we as coaches want,” Stein said. “She’s more vocal in practice talking to her teammates and helping players out.”

“When you get comments like that from someone such as herself, it definitely means a lot … knowing she has that confidence in you as a player and wants you to succeed,” she said.

The sophomore averaged 1.7 points a game and one rebound in 23 games last year as a freshman. She did not start in any of those games and was primarily used as a role player to relieve Pierre and Washington.

VanHyfte said there are still improvements to make.

“My ball handling skills are not quite where I’d like them because I didn’t have to worry about that part of my game as much in high school,” she said. “But it is something I’m working on every day in practice.”