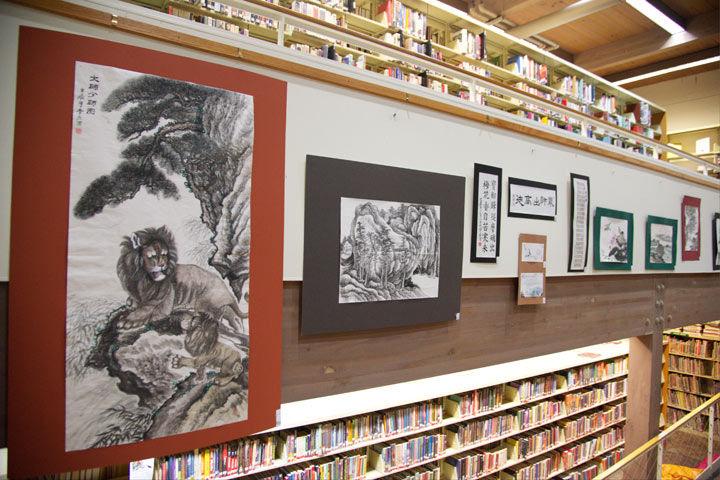 One Chinese painter and calligraphist continues to create new work more than 7,000 miles away from home.

Rongzhen Fu, who uses the pen name Yuan Zhen, has her art on display at the Carbondale Public Library until Jan. 5.

Since Fu retired from healthcare in 1995, she has been a student at Jinling University for the Elderly to pursue her life-long dream of being an artist. Her specialties are painting and calligraphy.

“She has dedicated her time to studying alongside similarly passionate seniors while cultivating and refining her own craft,” Fu’s daughter, Anna Xiong, said.

Fu’s elementary school art teacher recognized her artistic abilities early in life, however, her family didn’t have the financial stability to send her to the fine arts institute.

In middle school, her teachers again noticed her talent and recommended she take the entrance exam for the fine arts institute. She lived in a mountainous region, and because it rained on the day of the exam, she couldn’t catch the bus because of muddy conditions.

She missed her opportunities to study art when she was younger, so she instead furthered her education to be a teacher.

Fu stopped being a teacher when she became sick. When she recovered she went into the healthcare field.

She then began studying at her current university when she was 56. There are four levels of difficulty — basic, intermediate, advanced and research — but students are not limited to only studying for four years.

It allows students to learn as long as they want. After 20 years at the university, Fu is now studying advanced theories at the research level, which allows her to work with other students outside of school to create new works.

The goal of Chinese-style painting is to capture the outer appearance of a subject as well as its inner-essence, according to the Metropolitan Museum of Art.

Some traditional Chinese painters primarily use black ink, and any colors are usually light and watery.

There are several types of Chinese-style painting: portrait, landscape, flowers, birds, animals and insects, according to China Highlights.

Fu’s paintings vary in subject matter and color use. Her exhibit contains landscapes, flowers, birds and animals with vibrant water colors that contrast the black ink.

There are also several pieces of brush calligraphy, which is another popular Chinese art style.

Fu visited her daughter, Xiong, and grandson in Carbondale from June to November, and painted consistently during that time.

With the encouragement of friends and family, she decided to display her paintings at the Carbondale Public Library.

She wants people to learn about Chinese culture to enhance the friendship between China and the U.S., Xiong said, and she feels a responsibility to share it with the local community.

Fu hopes her exhibit will inspire the younger generation, just as American art she has seen has inspired her.

She said American art is beautiful and amazing. She wants to bring what she has learned to China to share with her teachers and classmates.

She hopes more people will work together in the future and share their cultures.

“I feel that this is great for the development of humanity,” Fu said.

All of Fu’s paintings and calligraphy are on sale at the Carbondale Public Library, and 10 percent of profits will go to the library.