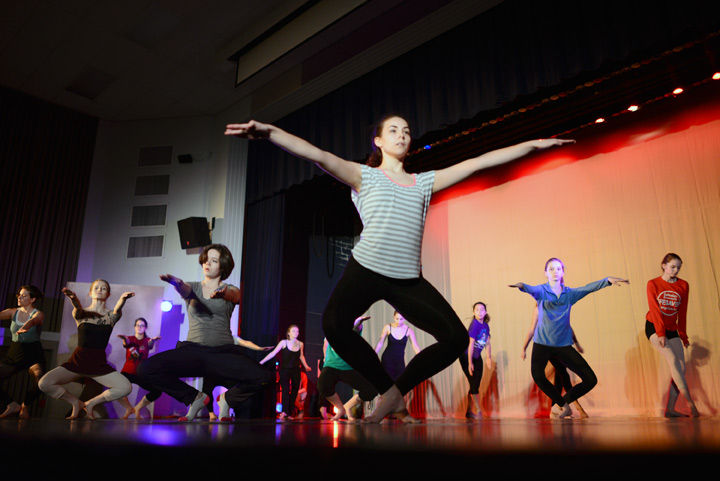 Through dance, every choreographer tells a different story or uniquely expresses their love for the art form.

From contemporary to jazz and hip-hop, the Southern Illinois Dance Company will present its annual fall concert at 7:30 p.m. Dec. 4 and 2 p.m. Dec. 5 in Furr Auditorium in Pulliam Hall.

This year’s showcase will include 10 new apprentices selected to join the company, remaining members and choreographers from the previous year.

Donna Wilson, faculty adviser and specialist for the kinesiology department and artistic director of Southern Illinois Dance Company for the last 30 years, will host the showcase.

Wilson said the team doesn’t compete, but it hosts a concert every semester to showcase the team’s work.

“I really don’t believe in competing, and that’s definitely gotten more and more popular, but we do still put on a performance because the team works so hard,” Wilson said. “We always start rehearsing the third week of each semester.”

Wilson said she hopes the audience and dancers have a good time, and that everything goes smoothly.

One year during their showcase, the lights turned off at Furr Auditorium in the middle of a dance.

“Furr Auditorium is very old and cranky. Sometimes the lights don’t work, so I really hope all the technical stuff works as planned,” Wilson said.

Jeremiah Beasley, a sophomore studying musical theatre from Champaign, has been a part of SIDC for two years.

“I’ve never had training in ballet, jazz, musical theatre dance and tap until my freshman year of college,” Beasley said. “However, I’ve been doing musical theatre since I was 11, so I’ve been kind of familiar with it all.”

Beasley hopes the upcoming show will bring a full house both nights. The team has put together a variety of genres for this year’s show with special guests.

“Our director, Donna Wilson, really strives to make every show just as good as the last. And whoever comes to see this show, and future shows, won’t be disappointed,” Beasley said.

Beasley taught a hip-hop piece for this year’s show, which he will also perform in.

“I unfortunately was busier this semester than the past two semesters, so I was really short on time with this piece, but my dancers have worked extremely hard and have really been patient with me,” he said.

Andrea Hernandez, a first-year graduate student in structural engineering from Barquisimeto, Venezuela, has been a part of the SIDC for three years. She has been dancing since she was 13 years old, when she first joined a hip-hop group in Venezuela.

Hernandez moved to Pinckneyville for her senior year of high school and joined the high school dance team. After graduation, she went to Rend Lake College and joined the dance team there. She transferred to SIU after one year at Rend Lake, and joined Saluki Dazzlers her first year and the Saluki Shakers her second year.

“I will be performing in two hip-hop pieces, one contemporary piece, one lyrical piece and one jazz piece for the show,” Hernandez said.

The most beneficial learning experience has been improving her communication, team building and organization skills, according to Hernandez.

“Organization is key to be a part of SIDC — knowing when all your practices are, fundraisers, what is going on every Thursday while balancing classes and other activities at the same time,” she said. “So, being a part of the team has helped me organize my time better.”

Hernandez is not only excited for the upcoming show, but said she is also proud of the company and all they have accomplished this year.

“I am very excited for the show. All the dances are amazing and really strong pieces. They all have a statement and I believe everybody is going to really enjoy them,” Hernandez said.

Kristen Levine can be reached @KLevine_DE or [email protected]