Saluki women’s hoops hoping to bounce back against Evansville 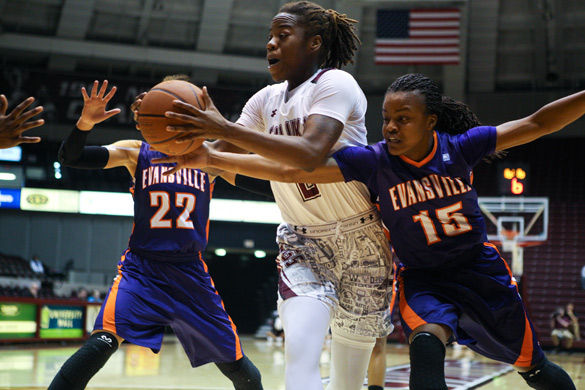 SIU women’s basketball looks to get back on track against the Evansville Purple Aces on Saturday in Carbondale.

During the game, senior guard Cartaesha Macklin could make history by becoming the university’s all-time leader in career points at SIU. She tied SIU Hall of Famer Amy Rakers with 1,538 points after a 22-point effort in a loss against Loyola Jan. 10.

The Salukis (10-6. 3-1 Missouri Valley Conference) 69-68 overtime loss against Loyola was the team’s first in conference. The Purple Aces have been much worse though as they dropped 11 straight games before winning against Bradley that same day.

Evansville (2-13, 1-3 MVC) is having a rough year after losing leading scorer Mallory Ladd to graduation and has struggled to score, ranking second-worst in the conference in scoring at 56 points per game.

Evansville is ranked last in the MVC in opponents’ scoring (giving up 71.7 points a game) and allows opposing teams to shoot 47 percent from the field and 33 percent on 3-point shots.

That could be trouble when the Aces meet the Salukis.

The Dawgs’ strength this season has been 3-point shooting, making .33 percent from outside, which is tops in conference. Macklin and junior guard Rishonda Napier lead the team with 40 and .393 percent, respectively.

SIU has to deal with Evansville junior guard Sara Dickey, who is the Purple Aces leading scorer at 17.8 points per game. Dickey has had big games against the Salukis in her career, averaging 23 points per game. Macklin and Napier draw the task of guarding her and hope to redeem themselves after allowing Loyola guard Taylor Johnson to score 29 points.

Senior center Dyana Pierre will match up against junior Sasha Robinson, who is healthy after dealing with an ACL injury earlier in the season. Pierre is averaging six more rebounds a game than Robinson. With Evansville being the second-worst rebounding team and SIU being the best in the conference, the Salukis have a chance to have a big game on the boards.