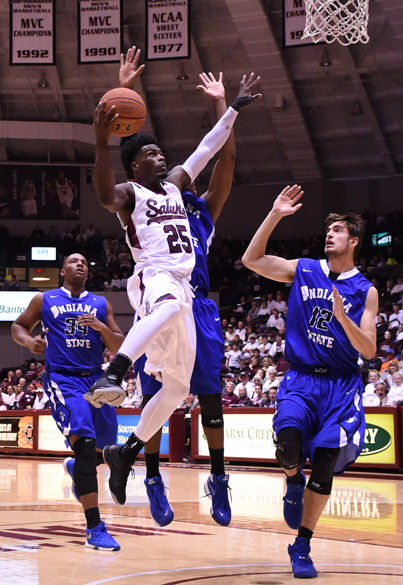 Saluki men’s basketball will be seeing white in the stands Sunday, and it won’t be snow.

SIU (17-3, 6-1 Missouri Valley Conference) plays the Missouri State Bears (8-11, 4-3 MVC) at 3 p.m. Sunday in Springfield, Mo., in what is being billed as a White Out game, similar to the Salukis’ home game against Indiana State on Wednesday.

While coach Barry Hinson will be returning to take on his former employer, he insists that the game carries no extra significance to him.

MORE: Missouri State serves as homecoming for some Salukis

On the court, the Bears are not a strong offensive team, though they have won three straight MVC games.

However, the Salukis should have a distinct advantage when the ball is in their hands. The Dawgs are No. 2 in the Valley in scoring offense (77 points per game) and take on a struggling Bears defense that allows 70.2 points per game.

Missouri State has had trouble guarding the 3-pointer — the Bears 3-point field goal defense ranks last in the MVC at 37 percent. The Salukis could have a field day exploiting this weakness as three Dawgs — senior guard Anthony Beane and junior guards Leo Vincent and Tyler Smithpeters — have shot better than 37 percent from deep so far this season.

Missouri State’s offense is led by the trio of junior guard Dequon Miller, senior guard Camyn Boone and sophomore guard Chris Kendrix. The three each average more than 10 points per game and more than half of the Bears’ points.

Miller, a transfer from Motlow College in McMinnville, Tenn., was a targeted recruit for SIU this offseason, and Hinson said he compares to Saluki guard Mike Rodriguez, who is also a junior college transfer.

VIDEO: Mike Rodriguez talks about his road to Carbondale

Boone is tied for third in the Valley in rebounding at 6.4 rebounds per game.

Another dangerous Bear to look out for is freshman forward Obediah Church, who is second in the MVC in field goal percentage (61.3 percent) and fifth in rebounding (6.3 per game).

The front court matchup of Boone and Church against the Salukis’ big men, junior forward Sean O’Brien and junior center Bola Olaniyan, should be an interesting battle to watch throughout the game.

Hinson said Church is dangerous because of his athleticism at the forward position, something he said the Salukis lack.

“He can explode in a matter of seconds running, and he can get up quicker than anyone in the Valley,” Hinson said.

If the Dawgs can contain the aforementioned trio and keep Church off the glass, they could cruise a 7-1 record in conference.