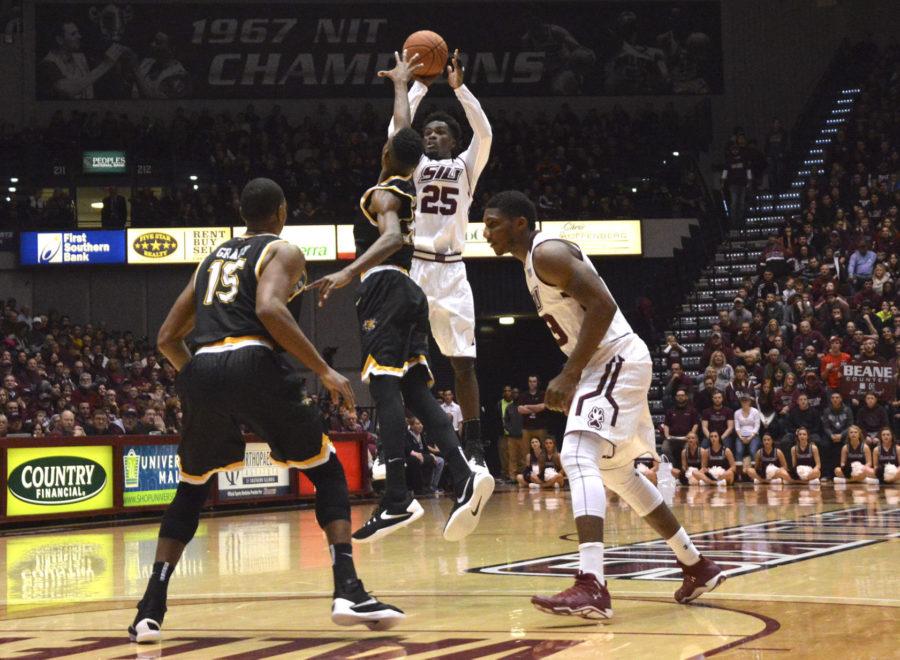 The SIU men’s basketball team lost its first Missouri Valley Conference game to Wichita State 83-58 in front of a sold out crowd of 8,289 fans Saturday afternoon.

SIU committed 17 turnovers in a game it needed to play nearly flawless in to win.

MORE HOOPS: Photos from the game | Our observations on WSU-SIU

“Obviously we’re not quite ready at that level, but that’s what we aspire to get to and that’s what were going to continue to work to do,” coach Barry Hinson said after the blowout loss. “Our guys were frozen from the get-go.”

Before the game Hinson said it would be the Salukis, not the Shockers, who would be shaken by the large crowd. He appeared to be correct after his team struggled from the opening tip.

Neither team’s offense was able to score consistently early. The first five minutes of the ball game had each team score one field goal, Wichita State led 6-5.

The Salukis committed seven team fouls, putting the Shockers in the bonus seven minutes into the first half. The Shockers went 10-13 from the line in the first 20 minutes.

It was nearly seven minutes between the Salukis’ first and second field goals; a 3-pointer from senior guard Anthony Beane snapped that streak. The Shockers extended their lead to 18-6 and went 3-5 from the field in that time.

Beane’s shot was the Salukis’ last 3-pointer of the game, while six of the Shockers’ last seven field goals in the half were 3-pointers. They finished the half shooting 7-12 from behind the arc.

“I thought the fans did a great job,” Beane said. “I think it was just on us, they shot it well. We just didn’t stick to our game plan. We didn’t get the ball moving — it was stuck in our hands and they contested our shots.”

Beane, who is on the watchlist for the Lou Henson Award, finished the half with eight points and the game with 15.

“They are strong and play hard, so credit to those guys,” junior center Bola Olaniyan said. “I think we came out a little shell-shocked today.”

Olaniyan finished the game with 11 points and eight rebounds.

The half ended with Wichita State leading 43-29.

The next half started with a steal on the inbound by WSU senior guard Evan Wessel, which led to a dunk by sophomore forward Shaquille Morris.

“The tell-tale sign was the start of the second half,”Hinson said. “When you come out of the locker room with your kids’ minds ready to go, and you pull a stunt like that — that’s the tell-tale sign right there.”

Wichita State started the half on a 18-3 run and didn’t look back.

Junior forward Sean O’Brien scored the Salukis’ first three points of the second half, all free throws that were 6:34 apart.

SIU scored its first field goal 8:28 into the half on a Beane lay-up. They had seven turnovers in that time.

The Salukis trailed by 33 points with 7:05 left in the game, their largest deficit this season.