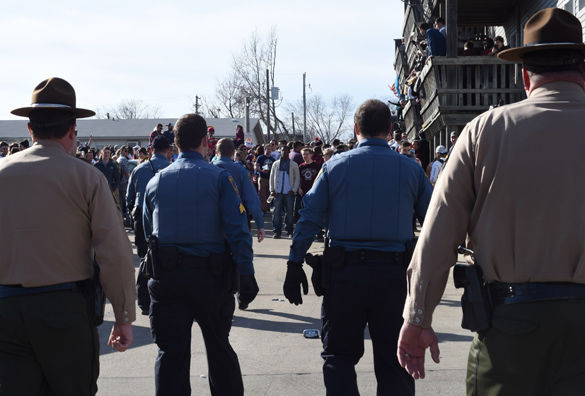 After a popular party destination for the Polar and Solar Bear celebrations distanced itself from the weekend drinking holiday, partygoers needed to change their plans.

Aspen Court Apartments increased its security and fenced off a courtyard in an attempt to decrease the amount of people partying on the premises, which worked.

“[Aspen] is where we start every year,” said Jayne Johnsrud, a junior from Rockford studying radiology. “Since Aspen isn’t happening this year we’re probably going to the bars and spending more money.”

Some restaurants, such as Saluki Bar and Underground Bar and Grill, offered free breakfast for party goers starting at 9 a.m.

Underground Bar and Grill cooks made between more than 1,600 pancakes for nearly 300 patrons. This was the first year the restaurants had this promotion.

“We had about 20 or 30 people waiting for the doors to open at 9 a.m.,” Underground manager Mario Briones said.

Saluki Bar offered free biscuits and gravy with the use of the Rovertown app, included with the $5 cover at admission.

Corn played at several venues Saturday, including what the participants called “Trap Alley,” a parking lot located near the corner of South Poplar Street and West Cherry Street.

“We just tried to set up and play some music to celebrate Polar Bear,” said Corn, who was written a ticket for violating Carbondale’s sound ordinance. “We knew we were playing loud music, so we locked the door so the cops couldn’t come in.”