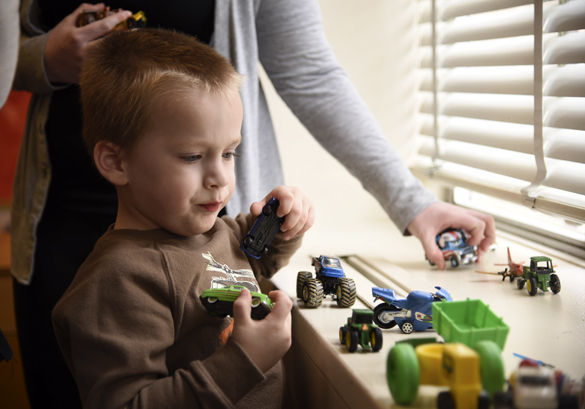 Dominick lines up toy cars along a windowsill under the supervision of Mary Foreman, a graduate student in communications disorders and science from Edwardsville, during a therapy session Tuesday at SIU’s Center for Autism Spectrum Disorders in Wham Education Building. The center will close after this semester if no state budget is passed. Valerie Boyer, director of SIU’s Center for Autism Spectrum Disorders, said the uncertainty is the most difficult part. “We’ve been waiting a long time,” said Boyer, an associate professor in communication disorders and sciences. “We feel like we perform a valuable community service so we would like to see it resolved, but honestly, just the knowing would be nice.” The center has been referring patients to Missouri, as the only facilities remaining in southern Illinois are private practices. “For a lot of people this isn’t an option because they can’t afford the out-of-pocket expenses,” Boyer said.

Services and research at SIU continues to be affected as Illinois nears its ninth month without a state budget, leaving many to scavenge for alternative funds to operate.

Republican Gov. Bruce Rauner and the Democratic Legislature have been unable to negotiate on a budget since July 1. Here are five examples of how the state’s historic stalemate is altering SIU’s operations and research.

The center will close if state funding is not established to provide a grant from the Department of Human Services — which usually provides about 90 percent of the center’s funding — before June, said Valerie Boyer, the center’s director.

Located in the Wham Education Building, the center provides speech and behavioral therapy for children with learning disabilities.

“Over the course of 2015, we were able to supplement about 25 percent of our annual budget with a combination of billing, fundraising and other types of revenue,” Boyer said.

As of July 1 the center had four full-time staff members and one contracted psychologist, but without promise of funds, many of its highly qualified staff have left in search of more secure jobs, Boyer said. The center now employs two full-time staff members, which has directly affected the number of graduate students in the program.

“We are a pre-professional training program, so right now we have six graduate students working at our center for course credit as part of their master’s program,” Boyer said. “Typically there would be nine, but we are down due to lack of supervision.”

The lack of staff this semester has also forced the center to stop accepting new patients — Boyer said CASD is only helping about half of the people it did in last year.

Sara Hazel, whose son has been using the center for nearly two years, organized a fundraiser in September that raised about $10,000 for the center.

“At the autism center, they specify his needs and it’s always one-on-one, which is exactly what a child with autism needs,” Hazel said of her son’s experience with the center.

The program, which has worked for the last 25 years to provide Illinoisans with road safety information, will cease to exist by the end of February.

It informed 14,000 individuals through 316 programs and events across Illinois in the 2014-15 school year on a budget of $270,000, which came from an Illinois Department of Transportation grant. Eleven-thousand of the individuals reached were teens, said Karen Carlson, a spokeswoman for SIU’s School of Medicine in Springfield.

The Department of Surgery, to which the program is attached, has been supplying the program with funds this school year, but can no longer bear the burden, Carlson said.

The program has two full-time faculty. Carlson said one of the faculty members, Nancy Kyrouac, was laid off. Danny Hicks, the other one, was lucky enough to be relocated to the Department of Family and Community Medicine in Springfield where he filled a vacant position.

“We sincerely hope that we can reinstate the program when funds are available,” Carlson said.

SIU HealthCare and the neurology department at SIU’s School of Medicine in Springfield have been funding the center, which serves downstate Illinois, in the absence of the $1.5 million that is normally supplied annually by the state, Carlson said.

Substantial “scale backs” have been made to the center in areas such as patient and family education, data collection for research and outreach through the center’s 93-county primary provider networks.

The Memory Clinic in Carbondale will not experience any cuts and will continue to offer services, said Dr. Sharon Smaga, assistant director of the SIU Family Medicine center.

Grants supplied by the department have been suspended until state legislators pass a budget. Sustainability and environmental research programs, which can be found in any of the schools at SIU, rely on these grants.

One of the groups affected was conducting invasive species research in the Shawnee National Forest. The group worked to stop the spread of invasive species, which is a “big problem” in southern Illinois, said Jim Garvey, SIU’s vice chancellor for research.

“The direct impact is not just on our researchers, but it’s also to the resources in the whole region,” Garvey said.

While department grants totaling $1.5 million have not been distributed this year, he said, “it’s not as dire as everyone makes it out to be.” On average, SIU’s overall research budget is about $70 million.

The research infrastructure at SIU is very strong and diverse, Garvey said. The research programs often find funds from outside sources, which helps protect research when the state encounters hard times like this.

“Honestly, grant support here at SIU has been up $12 million, relative to last year,” Garvey said.

The institute was suspended with little warning in April when a state grant from the Department of Commerce and Economic Opportunity failed to provide funds, Garvey said.

The institute supplied a wide range of research for the Illinois coal industry, from finding alternative uses for coal to improving the safety of mines.

One project that came out of the institute was Thermaquatica, which converts coal into a liquid form to create biodegradable plastics.

Garvey has been able to support graduate students in their research, and helped the 10 full-time faculty of the institute either relocate within the university or find jobs elsewhere. He said this was possible because the overhead that has come back on various grants that SIU research brings in. However, Garvey said he is nearly unable to provide graduate support because of other commitments.

“The problem is a lot of these people had worked for ICCI for over 10 years,” he said. “We would be starting from scratch if this program is ever reinstated, and that is a tragedy.”