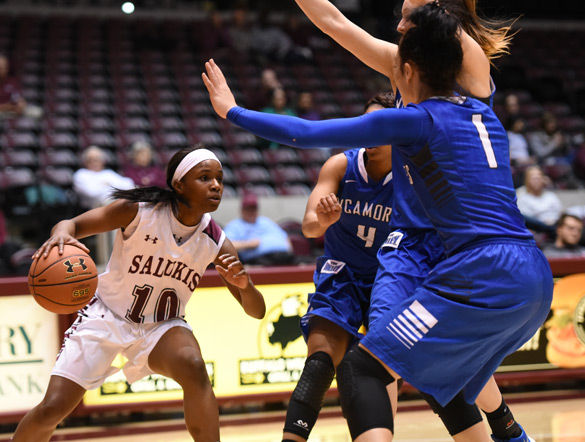 SIU women’s basketball used a big fourth quarter Sunday against Indiana State to stay in the hunt for a regular-season conference title.

The Salukis (19-9, 13-4 Missouri Valley Conference) outscored the Sycamores 22-11 in the fourth quarter en route to a 62-58 win. Despite SIU leading by as many as eight points in the first half, Indiana State looked ready to pull away in the second half on Sycamore Senior Day.

ISU used a 14-0 run to gain a 47-38 lead late in the third quarter before a jumper by Saluki freshman guard Olivia Bowling kickstarted a 7-0 run at the start of the fourth.

SIU regained the lead with under two minutes remaining on senior guard Cartaesha Macklin’s free throws and hung on for the win.

With the win, SIU clinched a top-four seed in the MVC Tournament and could grab a regular-season title if it beats Northern Iowa and Drake later this week.

The Sycamores (13-14, 9-7 MVC) entered the fourth quarter with a seven-point lead before the Salukis defense limited the opposition to just five made buckets. Redshirt junior guard Rishonda Napier scored eight of her 16 points in the fourth.

With a 3-point basket by Macklin a minute into the second quarter, the Salukis broke the single-season record for the most 3-pointers made with 190. The previous record was set by the 2011-12 team.

SIU remains in a second place tie with Missouri State and Drake and is a game behind first-place Northern Iowa.

The Salukis host UNI at 6 p.m. Thursday at SIU Arena.