Yepsen weighs in on Iowa caucus 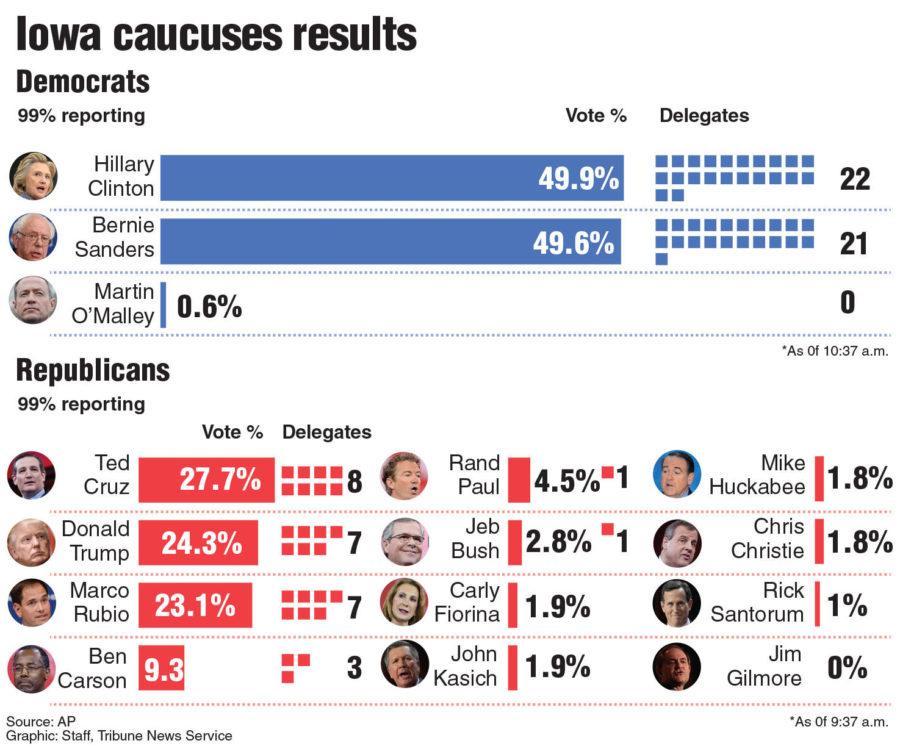 Donald Trump ate humble pie after losing to Ted Cruz by three points during the Iowa caucus. The race between Hillary Clinton and Bernie Sanders was so tight, six delegates were decided by coin toss. Mike Huckabee and Martin O’Malley dropped out for good.

Election season is in full swing.

The Iowa caucus on Monday signified the beginning of the electoral process for presidential nominees. As David Yepsen, director of the Paul Simon Public Policy Institute, puts it, the caucus serves two main functions: “elevate candidates and winnow the field.” Yepsen was the chief political reporter and columnist for the Des Moines Register before coming to SIU.

While it isn’t a tell-all for who will grab a party nod in November, candidates who secure delegates early on can build momentum that carries through the race, Yepsen said.

One of the more surprising candidates has been Sanders, who polled favorably among younger Democrats, securing 84 percent of caucus-goers ages 17 to 29. But whether Sanders has the clout to run against a GOP nominee in November is an open-ended question, Yepsen said.

Clinton claimed a narrow victory as results from holdout districts came out in the early hours of Tuesday morning. And although she may be at a disadvantage against Sanders during the primary in New Hampshire, Yepsen expects Clinton would fare better against a GOP nominee in “battleground states,” such as Nevada, Ohio and North Carolina.

Clinton has greater appeal among a broader spectrum of voters, he said, and is likely to secure many of the southern states in coming weeks.

Cruz won over evangelical Christians and Republicans who identify as “very conservative,” giving him the push to secure his three-point lead — the most comfortable win of any candidate in this year’s Iowa caucus.

Trump seemed all but certain he would win Iowa in the days preceding the caucus, and showed uncharacteristic signs of humility when he congratulated Cruz on taking first place.

“I think just about everyone in the political community is surprised about how long [Trump has] lasted,” Yepsen said.

While Cruz’s win is a noted advantage going forward, Yepsen said Marco Rubio shouldn’t be counted out yet, either.

Rubio finished just behind Trump, and appears to be a candidate the Republican Party “can live with,” Yepsen said.

“Rubio is starting to be the Republican establishment candidate,” Yepsen said. “I would expect that New Hampshire would help him cement that lead.”