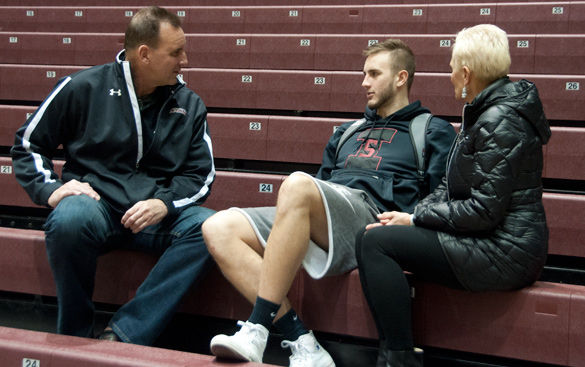 Even though Saturday wasn’t his best game on the floor, junior forward Sean O’Brien’s parents were still proud to see their son, just like they are after every game.

Bill and Judy O’Brien have attended nearly every game of Sean’s three-year Saluki career, and have gone to great lengths to do so. Hailing from Mundelein, Bill and Judy drive about 370 miles to Carbondale for all of Sean’s home games.

The couple typically leaves home seven hours before tipoff so they’re able to check into their hotel room and recover from the journey before the game.

“This is a hard commute,” Bill said. “But at this point, we’re just used to it.”

Judy said they have put 17,200 miles on their 2003 Chevrolet Suburban this season traveling to SIU games, bringing the vehicle’s total mileage to 275,000.

Financing these trips was difficult at first because of gas prices during Sean’s freshman year. Bill said a single trip to Carbondale usually consisted of a couple hundred dollars worth of gas and $70 to $80 for a hotel room.

Sean said having his parents make the trip to the games means everything to him.

“I feel more comfortable out there on the court knowing they’re always there to support the team and I throughout the good and bad games,” he said.

The O’Briens felt there was no better opportunity to see their son play — especially because since Sean left for college, the parents have no more kids at home.

“If we had high school kids there’s no way we’d be doing this,” Bill said. “We couldn’t be going to Carbondale for the night and leave a high schooler at home. You know what’s going to happen that night.”

After the game, the family typically goes out to eat together and the parents said they don’t get to bed until 1 a.m.

Late nights are worth it, however, as Bill said they’ve connected to the Carbondale community during their travels.

“We’ve gotten to meet a lot of the local fans over the years,” he said. “Got to know them by first name, gone out to dinner with a few of them. So that’s been fun for us in getting to know the local fans and hear their story too about how they follow the team.”

Sean’s parents also travel to Saluki road games, even if it means taking to the skies.

During Sean’s freshman season, they flew to Naples, Fla., more than 1,300 miles from home, to see the Dawgs compete in the Gulf Coast Showcase.

This year, they flew to Corpus Christi, Texas, to watch Sean get two straight double-doubles in the Corpus Christi Coastal Challenge. He also scored a career-high 25 points in the first game of the tournament and was named to the all-tournament team.

The farthest the family has driven is to Missouri State in Springfield, Mo., which is more than 1,000 miles round trip from their home in the Chicago suburbs.

Since Sean is a scholarship athlete, the family views the money it spends travelling as money it would have spent sending him to school.

Sean had scholarship offers from other schools such as Santa Clara in Santa Clara, Calif., Belmont in Nashville, Tenn., and Bradley in Peoria. He eventually chose between SIU and Santa Clara.

“I wanted him to go to Santa Clara,” Judy said. “I told him ‘Don’t even visit Southern’ because I hadn’t heard much other than it’s a party school. But we came down here, and he decided to commit. I’m so glad he did because in reality, we wouldn’t have been able to see many of his games in Santa Clara, and we love the atmosphere here.”

Regardless of how much they enjoy their travels, issues still occasionally arise.

On a trip to Drake University in Des Moines, Iowa in 2014, the Suburban’s alternator broke down in Rockford, about an hour away from home. This did not stop the family from getting to the game.

“We were already getting a late start, and we were so bent on getting to that game,” Judy said. “Bill wanted to go back home. We arranged for getting a rental car, but in the meantime our car started back up again, so we drove to a shop and got the alternator fixed within 50 minutes. We drove in white-out [snow] conditions and we got to the game with eight minutes left in the second half.”

Their efforts weren’t for naught, as the Dawgs won the game 74-58 amid 4.7 inches of snowfall, according to Weather Underground.

The family went to the University Library Cafe restaurant to relax after the game and made a tradition to go there every time they’re in Des Moines.

Not all road games are this challenging for the family as most other Missouri Valley Conference schools are closer to home than Carbondale.

Sean said knowing his family would be nearby was a big part in his decision.

“I knew they wanted to watch me play in college,” he said. “At the time, I didn’t know how many games they were going to come to. Now, after having them at almost every game, I couldn’t imagine being far away and not having them at my games.”

Bill and Judy are not always alone on their trips. They said Sean’s brothers and sisters come along as often as they can.

In addition to Sean, one former teammate in particular loved having Bill and Judy around.

Former Saluki guard Mike Balogun became close with the family in his one year with the program, the parents said. Sean and Mike became so close that the O’Briens let Balogun live with family during spring break because he couldn’t go back to his hometown of Staten Island, N.Y.

Flexibility in their jobs has been crucial to making the commitment.

Bill is a loan officer for Provident Mortgage in Libertyville while Judy works at a catering company.

“The way we view it is life’s too short, let’s enjoy it,” Bill said. “We’re basically going to blink our eyes and this will be over.”

The O’Briens will get one more year of traveling to see Sean compete as a Saluki before he graduates with a degree in sport administration in May 2017.