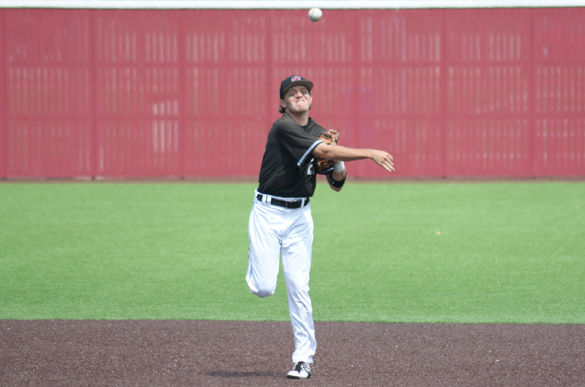 When SIU baseball coach Ken Henderson announced Friday that sophomore shortstop Chase Slone had decided to leave the team, the Salukis lost one of its key players.

Slone started all 58 games last season and led the Salukis in hits with 64 hits and batted .268 with 19 RBIs. He also had only five errors with a .982 fielding percentage.

Henderson said the decision to transfer was based on the sophomore’s desire to play shortstop every day. Slone didn’t agree with the coach’s decision to have him occasionally play third base.

With Slone’s departure, the question arises of who will start at what is one of the most demanding positions in baseball. Here are a few options.

Henderson said Kopach could be in the mix for a middle infield spot this season. Kopach is coming off a wrist injury that limited him to only three starts last season.

Pros: In his freshman season, Kopach started 39 of the 49 games he played in and batted .255 in the leadoff spot, which Slone primarily occupied last season. With his experience and skill, Kopach will likely be Henderson’s top option to replace Sloane.

Cons: Kopach sat out an entire year and it’s unclear he’ll be ready to go on opening day Feb. 19. With not seeing live pitching in over a year, Kopach might need more time.

Another option for the Salukis is Farmer who was the everyday second basemen last season. Farmer started all 58 games and could be a candidate based on his experience and leadership. Farmer was another of the players Henderson said could be in the mix for the starting shortstop position battle, one he said Slone had not been winning in the SIU athletics press release.

Pros: Farmer is the oldest and most experienced of all the infielders in the mix. He also boasted a .964 fielding percentage with only 10 errors.

This one might surprise some, but after talking with Henderson on Tuesday, Schmidt could be in the mix to play right away. Schmidt is primarily a third basemen, but has the versatility to play at a middle infield spot. Henderson said Schmidt could gain opportunities early on based on his “football player” work ethic.

Henderson said he isn’t opposed to starting freshmen, as he’s done so in the past. Slone played significant time as a freshmen last season and sophomore infielder Greg Lambert had a .276 batting average with 23 runs batted in to lead team. Lambert started 55 games as a freshmen.

Pros: Freshmen have proved they can be successful when given the opportunity and if the coaches believe Schmidt could be special, it could be a move that pays dividends. As the No. 1 ranked player in the state of Tennessee was an all-state selection his senior year and is tied for second at his high school for most hits in a season with 59.

Cons: He is just a freshmen out of high school who hasn’t seen a single pitch of the college game. It’ll take some time before he’s really settled in to the level of competition he’ll face at this level which could lead Henderson to go with someone with more experience.

If I’m Ken Henderson, the safe choice right now would be to start Kopach at short and keep Farmer at second. If Kopach isn’t ready, it creates a dilemma with the loss of Slone as he was the only person who played significant time at the shortstop position.  However, a possibility is shifting Farmer to short and starting Schmidt at second in the hopes of forming a dynamic duo up the middle. The problem with this is it pushes two players into unfamiliar positions.

The best case scenario is Kopach is healthy and will be ready to go and Farmer can remain in his normal position at second.