Chicago State University notifies all employees layoffs could be coming 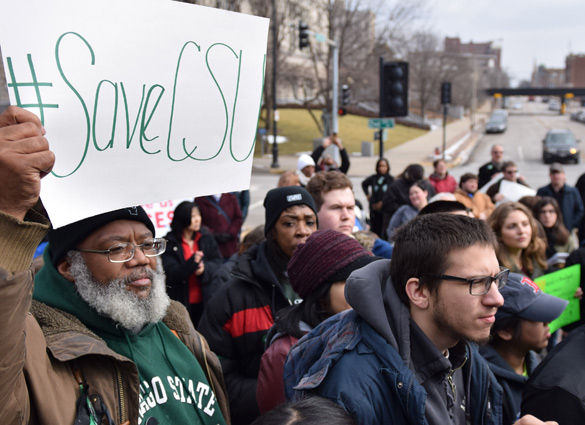 A protestor holds a #SaveCSU sign Feb. 26 at a rally in front of the State Capitol in Springfield. (DailyEgyptian.com file photo)

Chicago State University sent layoff notices to all of its 900 employees Friday, yet another sign of the escalating budget crisis for the public institution that stems from the state’s own budget impasse.

The university, with about 4,500 students, declared a financial emergency this month to make it easier to fire tenured faculty, eliminate academic programs and take other extreme measures.

“This is very distressing moment for all of us. We love this university. We know that for 150 years this university has done remarkable things with, in some cases, inadequate resources,” said Chicago State President Thomas Calhoun Jr. Friday morning. “So to be in a press conference where we’re talking about wide-scale layoffs is not the business that any of us are even in.”

MORE: What CSU’s closure would mean for South Side Chicagoans

The financial problems are a result of the budget impasse in Springfield, which has left colleges and universities without state funding since July.

While all the public schools are struggling to some extent, Chicago State is in the most precarious situation. About one-third of its budget comes from the state, and the school lacked financial reserves to fall back on.

University officials said they are currently unsure what percentage of staff and faculty will be laid off, and the layoffs won’t be announced for at least 60 days. A committee appointed by the board of trustees is reviewing all possibilities, Calhoun Jr. said.

About 300 employees are faculty members, according to a union representative.

A Chicago State spokesman said the university issued the layoff notices Friday because federal law requires that employers with more than 100 employees give 60 days notice of possible layoffs. The federal Worker Adjustment and Retraining Notification Act, known as the WARN Act, applies when a third of the workforce, or more than 500 workers, could be affected.

Calhoun Jr. said he is confident that Chicago State will not close entirely and called such a decision a “worst-case scenario.” The university will resume its summer classes and the fall semester as planned — with fewer faculty members — and has already received a “robust school of applicants” for the fall semester, Calhoun Jr. said.

“We will remain open, even if it’s in a pared down and different configuration,” he said. “We will roll up our sleeves and we will work as hard as we can. Our university will emerge as a strong university in spite of indifference and a lack of action on the part of Springfield.”

Chicago State also announced this week that it had canceled next month’s spring break and would instead hold classes then to help ensure students could finish the semester before the school may be forced to close down due to the lack of state funding. The spring semester will now end April 28 rather than May 13.

Declaring financial exigency typically makes it easier for universities to lay off employees, including tenured professors, who have the greatest employee protections. An exigency is defined by the American Association of University Professors as an “immanent financial crisis which threatens the survival of the institution as a whole” and one that cannot be alleviated by less drastic means than firing faculty.

Colleges and universities have been operating without money from the state since July 1, when Republican Gov. Bruce Rauner vetoed an out-of-balance spending plan sent to him by ruling Democrats in the legislature. Much of state government has received funding through various court orders or legislative and executive maneuvers to stay afloat, but higher education, for the most part, has had no relief.

The budget impasse is having other effects on the state’s colleges and universities. Credit ratings have been downgraded by Moody’s Investors Service and other agencies, and their accreditation could be at risk.

Earlier this month, the Higher Learning Commission, the accreditation agency that oversees Illinois’ public colleges and universities, asked that they submit emergency plans detailing how they will accommodate students if the state budget crisis forces them to close. The agency also asked all the state’s 57 public schools to provide basic financial and enrollment information, including the current cash situation, cuts in faculty and staff, and expectations for fall enrollment “in light of concerns prospective students may have about the stability of higher education in the state.” A Chicago State spokesman would not provide the university’s answers to the Tribune on Friday.