Salukis split day one of the Stetson Invitational 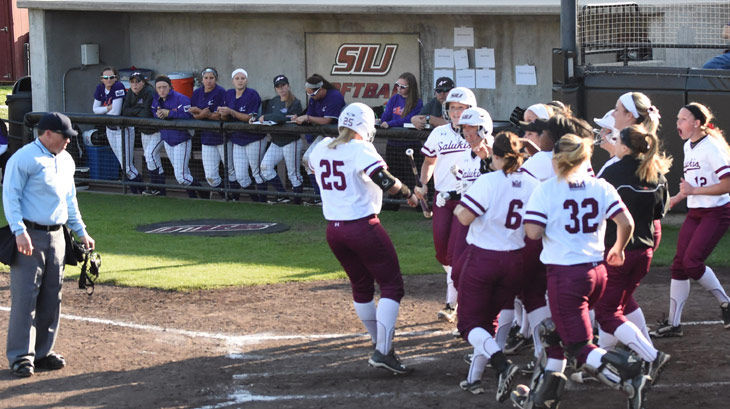 SIU softball (6-4) played 10 innings during a doubleheader on Friday instead of the normal 14 and the results were drastically different.

The team was run-ruled by Pittsburgh (8-4) in the first game before bouncing back with a run-rule win against Providence (3-3) in the second.

“We were really flat coming out in the first game,” coach Kerri Blaylock said. “I understand we didn’t pitch particularly well, but we had no energy on offense. We didn’t do anything to get a rally started, so that bothered me.”

Dover walked nine in 4.2 innings with four of the Panthers’ eight runs coming from walked batters.

“She had control problems, but I’m confident she’s going to bounce back tomorrow,” Blaylock said.

Things weren’t much better offensively as the Dawgs tallied four hits in the game. They were 1-9 with runners on against the Panthers.

Four of the five innings featured Salukis reaching scoring position, but they batted 0-4 in those situations.

After Pittsburgh scored one in the second and two in the fourth inning, the wheels fell off for SIU.

Pittsburgh got two walks, two singles, two hit by pitches and two sacrifice flies to tally five runs and close out the game in the final inning.

SIU took 30 minutes to reset and prepare for the second game against Providence.

The Salukis came out quick in the first inning as the first four batters of the game reached base. The scoring was bookended by freshman left fielder Eyrika Brandenburg’s leadoff double and junior first baseman Shaye Harre’s two-RBI double.

Her adversary in the pitcher’s circle, SIU freshman Brianna Jones, finished the game with two hits allowed, four strikeouts and one walk in five innings pitched. She now has a nation-leading four complete game shutouts this season.

Jones carried a perfect game into the third before allowing a walk and bunt single, but she escaped the inning without a run allowed.

The Salukis added four more runs in the third to extend the lead to 7-0. Harre finished the game 2-3 with four RBIs on a double and home run.

“I was trying to get back on track because the first game went downhill,” she said. “My first at bat of the second game I was just trying to jump on the first pitch I saw I could get a good hack on.”

Freshman third baseman Hanna Stam added the third and fourth runs of the inning with a two-out, two-RBI single to center field.

SIU completed the rout with three more runs in the bottom of the fourth. The Salukis had runners on the corners with two outs when junior center fielder Merri Anne Patterson homered to left center field on the first pitch of her at-bat.

It was the first extra-base hit of the year for Patterson, who is batting .172 with 10 strikeouts this season. She doubled her RBI total on the year with the homerun.

“I think it is good for her mentally,” Blaylock said. “She is starting to see the ball better and hit the ball harder.”

The Salukis finish the Stetson Invitational with two games beginning at 11:15 a.m. Saturday in DeLand, Fla.

Sean Carley contributed to this story.