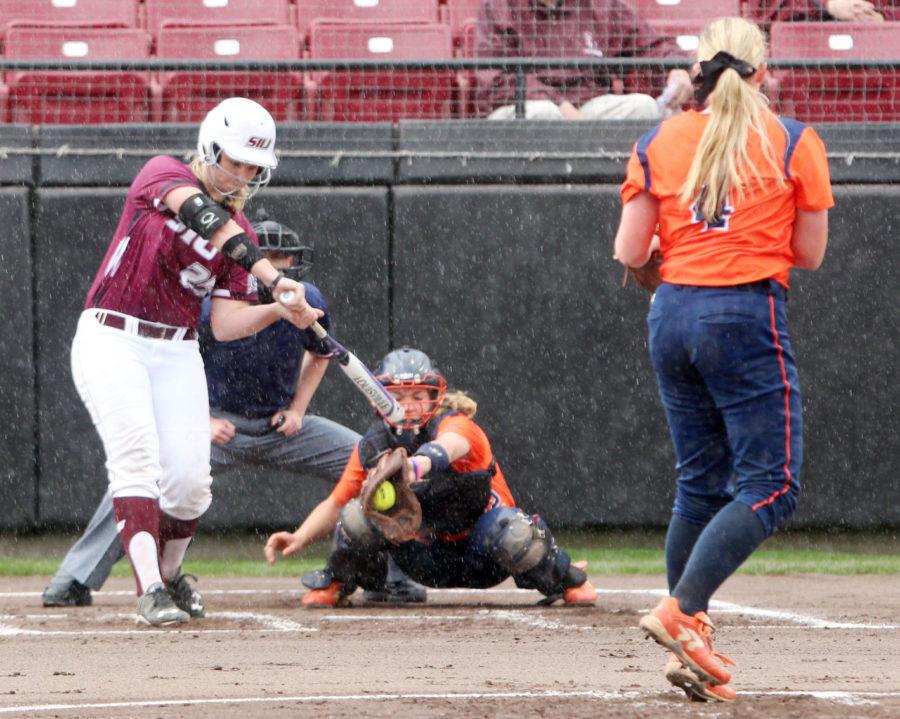 This year’s Saluki softball team will have some new names on the field, but its leaders are back to battle.

Six of the probable starters in the field return from last season, but just four of them will play the same position as last year.

SIU will only start one senior this season, making it one of the youngest teams in the Missouri Valley Conference, which coach Kerri Blaylock said is a positive.

“We’re so young and so unknown, and I love it,” she said. “I love that people don’t know what we’re about and they can’t scout us.”

The Dawgs were picked sixth out of 10 in the MVC preseason poll, but the women are confident they can do better. The Dawgs finished fifth last year after being pegged as the fourth-best team in the preseason poll.

“The underdogs are going to take over,” junior first baseman Shaye Harre said.

Every Saluki starting infielder played in at least half of last season’s games.

Team captain junior Jessa Thomas will catch for SIU, while fellow team captain Harre will be at first, sophomores Savannah Fisher at second and Sydney Jones at third. Gonzalez, the final team captain, will be anchor the infield at shortstop.

Harre, Gonzalez and Fisher started a combined 125 games at their positions last year.

“Since we have a young outfield, we’re trying to take control on the infield and help them out with calling plays,” Gonzalez said. “It helps [when] you know how each other plays, like who can get to which ball, if this happens then what is she going to do?”

Saluki infielders combined for 35 errors last season, but they are confident that number will decrease. Nine of those 35 came from Brook Womack who transferred to Chattanooga. The middle infield of Gonzalez and Fisher had 16 but feel they’ve gotten better together with time.

“We got last season under our belts, so we’re just a lot more comfortable playing around each other,” Gonzalez said.

Returning infielders from last year’s team combined for a .246 batting average. The team hit .254, which ranked No. 9 in the MVC.

“As a whole on offense, I feel like we’re a lot more confident,” Harre said. “We have speed, we got people who can get on base, we have more power and we got a lot of people who have stepped up from last year and are hitting the ball really well.”

SIU took perhaps it’s biggest loss in the outfield with last year’s MVC batting champ Kalyn Harker (.466) graduation. But there was a quick fix waiting in the wings.

Junior Merri Anne Patterson, who finished 11th in MVC batting at .384, will move from left field to center field this season and is the most experienced outfielder on the team. Because of her experience, Patterson has already improved an outfield that has two freshmen in a four-woman unit.

“She’s been such a great leader and has helped us new girls out a lot,” freshman Eyrika Bradenburg said. “No matter how good or bad you are at the moment, she’ll help you get through it.”

This season’s roster carries just 12 position players to fill eight spots as opposed to 14 last year, so every player is expected to see time. Even with the smaller roster, Blaylock feels the team is ready to go.

The Salukis will hit the field for the first time at 11 a.m. Friday to take on Tennessee-Martin in Hammond, La., as part of the Lion Classic.