Saluki softball walks away from Day Two with another split 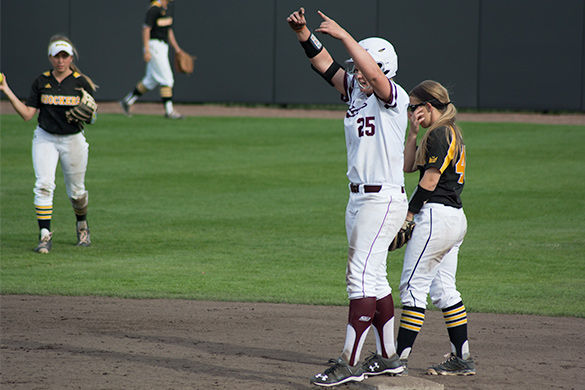 Day Two of the Saluki softball season resulted in the same outcome as Day One, but two vastly different roads were taken.

The Salukis (2-2) defeated Mississippi Valley State (0-4) in a mercy-rule shortened ballgame, 12-0, then allowed Southeastern Louisiana (3-0) to come back from a three-run deficit to steal victory from SIU, 5-4.

“We played 11 great innings and one bad inning,” coach Kerri Blaylock said. “But again we had great pitching and we hit the ball a lot better today. We played really well.”

One aspect of the first game was identical to yesterday’s: freshman pitcher Brianna Jones finished with a complete game shutout.

Jones threw six innings of shutout ball with nine strikeouts. She only surrendered three hits and two walks throughout the contest.

“We’ve had some great hall-of-fame pitchers at Southern, and she’s starting like they have,” Blaylock said on Jones’ start.

“I was just more focused in on getting good hard contact today and getting the bat head through the ball,” Harre said.

Harre then sparked the Saluki offense in the fourth with the team’s first home run of the year. Sophomore utility player Savannah Fisher, senior shortstop Kelsey Gonzalez and freshman left fielder Eyrika Brandenburg also got RBIs in SIU’s five-run inning to put the Dawgs up 7-0.

Five runs were scored in the sixth inning as well, and Harre contributed again with a RBI single. She finished a triple away from the cycle. Patterson and sophomore utility player Jessica Heese got the other RBIs in the inning while a Devilette error allowed another two runs to push the lead to 12-0. MVSU went down in the sixth without a hit and the mercy rule took effect ending the game.

Game two started out well for SIU, but a four-run inning did the Salukis in.

Sophomore infielder Sydney Jones singled Gonzalez home to give the Dawgs a 1-0 lead in the top of the first.

“The way she throws, she moves the ball around, she’s going to try to make people miss,” Blaylock said. “That’s what happens when you have a pitcher like that.”

SIU scored a second run in the second inning on a junior catcher Jessa Thomas RBI single, and added a third in the fifth on Harre’s second home run of the day to give the Salukis a 3-0 lead.

The Lions got one back in the bottom of the fifth after sophomore catcher Carlie Whittington walked, stole second and came home on a sophomore outfielder Kinsey Nichols single.

After SIU added the run back in the sixth, Southeastern Louisiana chased out Dover with two leadoff walks. Jones replaced Dover in the circle, and walked the bases loaded with no outs. A fielder’s choice, a Thomas error and a senior outfielder Katie Lacour single resulted in four runs giving the Lions a 5-4 lead.

“[The loss] hurt a lot because on offense we made a lot of adjustments and if we didn’t commit that error it’s an entirely different game,” Harre said.

The Salukis went hitless in the seventh to close out the game.

“We were down after the game,” Harre said. “But like coach told us its all easy things to fix, so we know we can come out tomorrow and work on it.”

At one point in the game, six of the nine position players were either freshmen or sophomores.

“We’re so young I feel we play that game again a month from now, we probably win that game,” Blaylock said.

SIU plays Buffalo at 10 a.m. Sunday to close out the Lion Classic in Hammond, La.

“We want to put it all together [Sunday],” Blaylock said. “We’re just learning, we want to get better every game.”