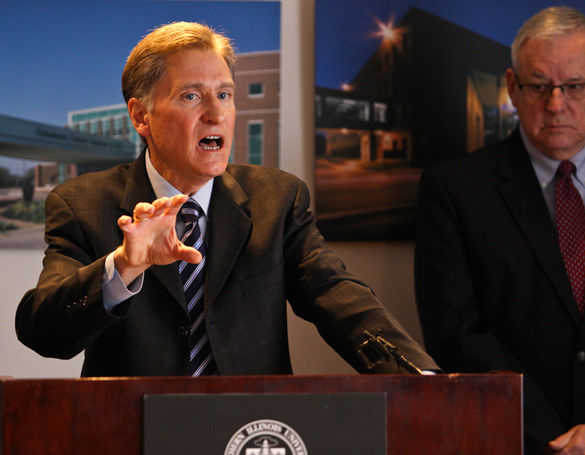 In an email sent to faculty and staff on Wednesday, Dunn said the campus would see a reduction of $22,856,000, which includes removing its men’s and women’s tennis teams, eliminating student employment opportunities and reducing the time Morris Library is open. The announcement comes a day before Dunn will appear in front of an Illinois Senate committee for higher education appropriation to detail the financial state of the SIU system.

Here’s what would be eliminated under Dunn’s proposal.

The campus would eliminate more than 180 faculty, administrative professional and civil service staff positions, which would save $5,503,284. Eighty of those positions are vacant. This would require a “review of individual teaching loads for tenure/tenure track faculty which may reduce the number of adjunct instructors,” according to Dunn’s email. Academic programs would be eliminated, reducing more than 400 classes. This could make it longer for students to graduate, and “reduces support services for students, particularly underrepresented populations.”More than 300 student employment positions would be eliminated, including on-campus jobs for undergraduates and graduate student assistantships, saving the university $3,787,596. The elimination off on-campus jobs reduces student employment “that helps students pay for their own education expenses.”The campus would eliminate its men’s and women’s tennis teams, saving $688,000.Hours at Morris Library would be reduced. The building would be closed up to 28 more hours each week — including all of Saturday. The university would eliminate state funding support for Touch of Nature, saving $509,505.

Dunn said he is still working with other higher education leaders to find a solution that would avoid such drastic cuts.

“If nothing changes on the political front anytime soon — and we don’t plan for reduction actions today to stem our own tide of red ink — SIU will find itself poised on its own fiscal cliff in not that many more months down the line,” Dunn said.

This story is being updated.