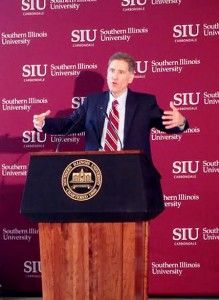 Southern Illinois University President Randy Dunn on Wednesday released a report showing how much the system’s campuses could lose if Republican Gov. Bruce Rauner’s proposed 20 percent reduction in state university funding is enacted as part of a budget for fiscal year 2017.

The report shows that SIUE would have to cut to the tune of over $14 million if the proposal holds, and maybe even more under a worst case scenario.

“We will be able to make it through to the end of the current 2016 fiscal year on June 30, even though we have not received one thin dime of state support for general university operations since last summer,” Dunn said. “Indeed, if payments to the universities would have been made thus far this year … SIU would have had about $150 million more passing through its coffers by this point.”

All of the internal borrowing we’ve been doing from various reserve and special accounts still must be paid back eventually.

Noteworthy proposed cuts to SIUE include:

Cuts to the system’s flagship campus in Carbondale could reach nearly $23 million, including notably:

The university’s credit rating recently was affirmed, something Dunn said was encouraging. But he said that doesn’t mean SIU isn’t in dire straits.

“All of the internal borrowing we’ve been doing from various reserve and special accounts still must be paid back eventually. If we end up seeing no budget at all in these remaining months of FY16, it will take us years to get those paybacks done … there are severe consequences for overspending unrestricted funds that we’re accessing to provide us cash flow through this period,” he said.

Dunn also asked staff to prepare a doomsday scenario that predicted additional cuts if the state failed to approve a budget until after the November general election.

Under that scenario, the following additional cuts to SIUE are possible:

$1 million that’s allocated to SIUE’s East St. Louis Center. The Center would close.$2.03 million in research programs and services.$2.2 million by instituting a cost shift within the School of Dental Medicine. It would increase tuition for the program by 30 percent.

Dunn described what many other state universities are facing as “existential” crises and warned that SIU might soon be counted among their ranks.

“If nothing changes on the political front anytime soon — and we don’t plan for reduction actions today to stem our own tide of red ink — SIU will find itself poised on its own fiscal cliff in not that many more months down the line.”