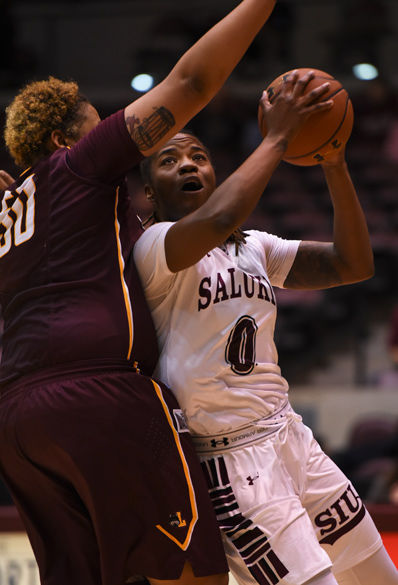 The Missouri Valley Conference women’s basketball tournament opens Friday at the iWireless Center in Moline, and without one dominant team, the championship is anyone’s for the taking.

The Valley’s top four teams entered the final weekend within a half game of each other. With no teams in the top 90 of the NCAA Rating Percentage Index, the MVC will likely only receive one bid in the NCAA Tournament.

Drake (21-8, 14-4) is the second seed in the conference tournament and was 1-1 versus the Salukis this season.

“Everyone’s been telling our team how they got beat twice by Loyola,” SIU coach Cindy Stein said. “I just want people to continue talking about that, because, obviously, it ticks us off a little bit.”

“I don’t know if anyone in our league has stopped them yet,” Stein said. “If you watch all their games, those two have dominated every single game. We’ve got to play better defense. They got us back on our heels the second game at their place, and we know that they’ll look to continue that type of attack.”

The Ramblers’ two Taylors combined to average 30.3 of Loyola’s 65.1 points per game in the regular season — the third-highest percentage of points by two players in the conference.

In contrast, only Indiana State relied less heavily on its top two scorers than SIU. Napier and Macklin contributed 28.4 of the Salukis’ 69.0 points per game.

Each of the top-four teams in the MVC beat at least three of the other top-five teams during the regular season. Loyola came within a regulation basket of beating Missouri State in a Feb. 12 overtime loss, which would have given the Ramblers the same such distinction.

“We match up with Southern very well,” Loyola coach Sheryl Swoopes said. “They match up with us very well. There aren’t a lot of teams in the Valley that have a true center like we do in Manuel and they do in Pierre. I think it’s going to be one of those games where the team that comes out … playing their best basketball is probably the team that’s going to come out on top.”

Coach Tanya Warren said her team cannot afford to rest on the strength of those victories.

“Everyone’s coming in 0-0,” Warren said. “It’s a new season, and anything can happen. We have to be able to understand that what happened in the regular season has nothing to do with this tournament.”

It all starts with Wichita State and Bradley at 4:04 p.m. Thursday in Moline.