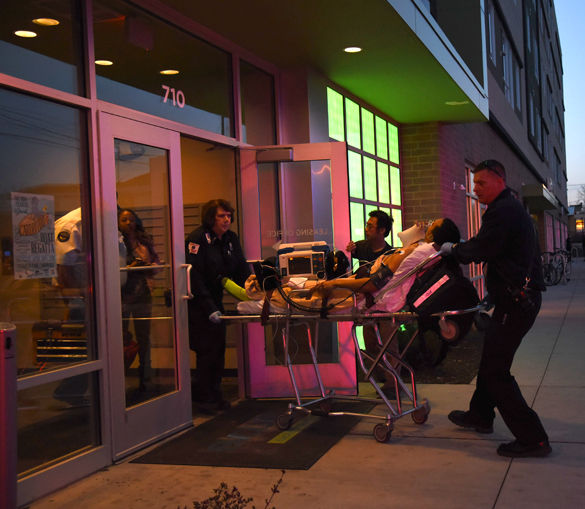 A male is wheeled out of Evolve Apartments at SIU on a stretcher March 29 in Carbondale. — March 29, 2016. Carbondale, Ill.

Carbondale police said a person was shot Tuesday evening at Evolve Apartments at SIU — the third person wounded by gunfire in the city since Sunday morning.

Lt. Matt Dunning said the department is investigating a shooting at the apartment complex, which is across the street from campus property. The victim, 19, of Florissant, Mo., who was not identified in a news release, was taken to the Memorial Hospital of Carbondale with a non-life threatening gunshot wound to his lower back.

Officers responded to the call of a person shot about 7 p.m. to the building in the 700 block of South Illinois Avenue.

Police said the victim and the suspect, who are acquaintances, were involved in an altercation that led to the shooting.

The suspect fled the scene after the incident, according to an SIU timely warning, which was emailed to the SIU community about 10:50 p.m. The suspect is a 6-foot-2 black male with short, black hair, police said. He is about 170 pounds and 20 to 25 years of age.

“The police are currently conducting an investigation,” Evolve tweeted to tenants shortly after 7:30 p.m. “The building is safe and secure, and we have no more information currently available.”

The shooting is at least the fifth example of gun violence in the city this year.

Multiple students on scene, including Carter Cole, said the shooting occurred on the second floor of the apartment complex. Cole, a senior from Japan studying management, said he was outside of the building when an officer “sprinted as fast as he could” into Evolve.

First responders rushed a young male out of the building on a stretcher. A woman attempted to get in the ambulance, but emergency responders did not let her.

“Fuck your policies,” she yelled back.

After the news broke, students and community members reacted on social media, tweeting things such as, “I’m about to head to Evolve, maybe I should wear some Kevlar #CarbondaleShooting,” and “If you like unsafe, small cities and rising tuition rates, come to Carbondale!”

On Sunday morning, Tim Beaty, 41, of Carbondale, was killed by a stray bullet while in his bed at home in the 400 block of West Walnut Street. Another man was shot the same night.

Before Sunday’s shooting, Spencer DePue, a senior from Bolingbrook studying management, was shot and mugged Jan. 30.

More recently, Andy Juravic, a sophomore from Glenview studying business, was robbed at gunpoint about 200 yards from the west side of campus, just north of the Communication Building.

CPD said it will continue to patrol the streets and talk to civilians to ease concerns about safety.

“This is your police department, this is your community, we do a lot, but we need help also,” Carbondale police spokesman Sgt. Corey Kemp said during a press conference Monday. “That’s one thing — we make sure the community is out there helping us also. … We make sure we do our due diligence.”

MORE: How safe do you feel in Carbondale? Join the conversation here.