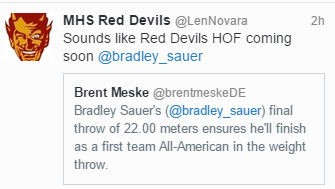 SIU track and field came away with two All-Americans in two attempts during day one of the NCAA Indoor Championships.

Senior thrower Bradley Sauer earned his first All-American honor after finishing fifth with a throw of 22.00 meters on his final attempt in the weight throw. He entered the competition seventh in the nation and was sixth entering the final round of throws.

Southeast Louisiana senior Alexander Young won the event with a throw of 23.80 meters, a new facility record at the Birmingham CrossPlex. He entered the competition fourth with a season-high throw of 22.58 meters.

Purdue senior Chukwuebuka Enekwechi entered with the lead, 23.89 meters, but finished second at 23.65 meters. He held the preivous facility record at 22.79 meters.

Sauer finished as a second team All-American during the 2012-13 season, before a torn labrum in his left shoulder kept him out the following season.

The award follows his first Missouri Valley Conference title, where he won with a throw of 21.54 meters.

The Carbondale-born senior completed three of those goals and finished less than two feet from his mentor and will be second all-time at SIU for the time being.

Landon was fresh off his fifth MVC title in as many tries with a season-high clearance of 2.25 meters.

The Chester native said prior to the event his biggest competition would be Texas Tech senior Bradley Adkins, who was tied for first nationally with TAMU-Kingsville senior Jeron Robinson at 2.29 meters.

Texas Tech sophomore Trey Culver won the event with a height of 2.23 meters. He entered the competition tied for 13th in the nation at 2.19 meters.

Senior thrower Josh Freeman is the final Saluki left to compete. He will compete in the shot put at 2 p.m. Saturday.