Bullpen catcher helping team on and off the field 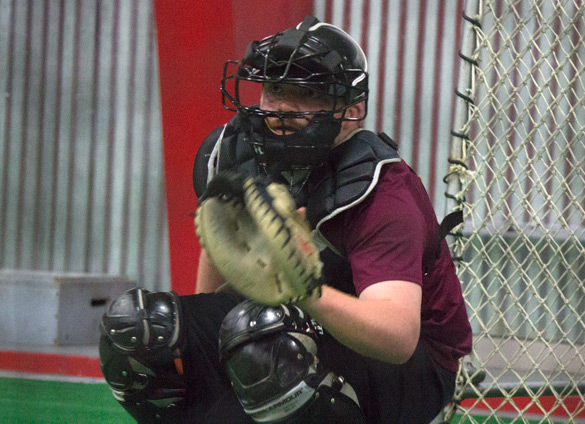 Without having an at-bat in a game or playing an inning in the field, Ethan Maxey has found a way to contribute to Saluki baseball.

Maxey, the SIU baseball bullpen catcher, is in a position where hardly any Saluki fan would know him by name, but because of his red hair, the senior stands out running across the field, earning the nickname “Red Runner.”

“I guess it’s mainly because of my hair color, but I also try to be wherever the coaches need me to be to do whatever they ask of me as quick as possible,” Maxey said. “This is a great opportunity because how many guys get to say they play Division I baseball?”

Besides warming up relievers before they enter the game, Maxey also helps out in practice by running the bases, throwing batting practice and catching the pitchers. He gets to travel with the team, which is 12-7 in 2016 after going 12-46 last season.

Maxey, a Salem native, transferred to SIU from Kaskaskia College in Centralia — he last played organized baseball as a catcher in high school. He attended a walk-on tryout, and although he didn’t make the team, coach Ken Henderson said he was anxious to be a part of the program in some capacity.

“We told him we didn’t think his game fit at this level, but he came to us and wanted to know where he could help out,” Henderson said. “We’ve had a bullpen catcher in the past and it worked out pretty well and the guys really seem to enjoy having him around, so we’re happy to have him.”

Henderson said having a bullpen catcher has its advantages outside of helping out in practice.

“It takes the pressure off our two catchers we have on the roster and helps the team out as a whole,” he said. “We don’t have to have one catcher running down to the bullpen and with Ethan down there, the other catcher can watch the hitters from the other team and take notes to help our starter for tomorrow.”

While he’s not a part of the active roster, Maxey is still treated as one of the players.

Freshman pitcher Mitch Townsend said the relievers are grateful for what he does.

“He’s always there willing to catch for us and long toss and just whatever we need,” he said. “Sometimes we’ll bounce a pitch in the dirt just for fun, but we have a good laugh about it afterwards.”

Junior pitcher Anthony Shimkus said Maxey has been a big part of the bullpen and he’s a big help when it comes to helping them prepare in practice and during games.

“That kid, he’ll do anything for you no matter what day it is,” he said. “Off days he’ll come throw with you, he catches all of our bullpen sessions during practice and if we ask him to, he’ll long toss with you three times a day. It’s just really awesome to see how dedicated he is and how willing he is to do whatever we ask him to do. That makes him such a great kid who loves being around the game.”

The Salukis play Memphis in a three-game series starting at 6:30 p.m. on Thursday at Itchy Jones Stadium.