Saluki seniors no strangers to adversity 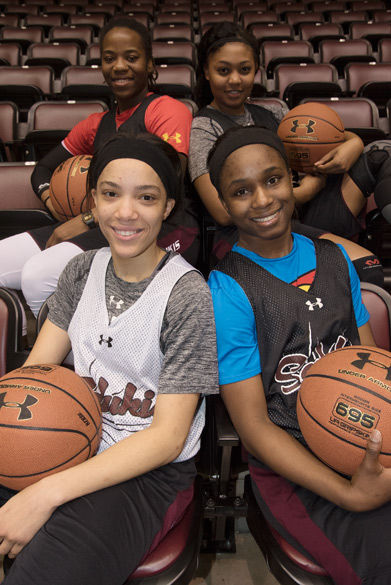 A roller coaster of a career for the seniors on the SIU women’s basketball team is slowing down.

Three of the four seniors on this year’s team — center Dyana Pierre, forward Azia Washington and guard Cartaesha Macklin — have been with the program through losing seasons, a coaching change and a couple of redshirt seasons. Guard Blair Stephenson joined them last season as the Salukis made a historic turnaround.

“We’ve surpassed a lot of adversity,” Macklin said. “This team has really been through a lot, and being able to conquer something above that has been remarkable. I’m proud of that as a whole.”

All that remains for them is the final two games of the regular season and the Missouri Valley Conference Tournament next weekend.

The Salukis are in a three-way tie for second place in the MVC with Drake and Missouri State, half a game behind Northern Iowa. SIU hosts UNI and Drake with a chance to earn the top seed in the tournament.

Losing has not been the only pain the seniors have endured. Recruited by former coach Missy Tiber’s staff, Pierre and Macklin joined the Salukis in 2011. Pierre redshirted that season with knee injury. Macklin took a medical redshirt in 2013-14, Stein’s first season at SIU, when she was pregnant with her son, Carson.

“I’ve excelled at a level that I didn’t expect at all,” said Macklin, a native of Mayo, Fla. “I came in as a freshman, and I was a little shy in a different atmosphere, but I really set myself into the program.”

Once a shy freshman more than 700 miles from home, Macklin left the gym Tuesday by smacking a practice team player on the rear end hard enough to echo through the nearly-empty SIU Arena.

Washington had stayed healthy in her Saluki career until this season, averaging 24.6 minutes per game and starting 58 of 60 games in her sophomore and junior seasons. Nagging knee problems have limited her to six starts and career lows of 3.7 points and 10.3 minutes per game this season.

“Last year, I would’ve told you [my career] was exceeding everything I thought I would’ve accomplished,” she said. “With my injury, it’s a little more frustrating. My career is ending on a more sad note because I wasn’t able to do what I had planned on doing, especially coming off a great junior year.”

Stephenson has averaged 1.2 points per game for SIU since being recruited out of Lake Land College to be a defensive specialist for the Salukis.

“[The 5-25 record] wasn’t a factor,” Stephenson said. “This coaching staff recruited me tough. They let me know that they wanted me to be a part of the change.”

Coach Cindy Stein said each woman’s ability to move past her trial is a testament to her character.

Once their Saluki careers are over, the seniors have divergent plans for the future. Washington will finish graduate school and move back home to the Kansas City area to find a job and “find out what life is like after basketball.”

Stephenson and Pierre plan to continue their education at undetermined locations; Stephenson in social work and Pierre in athletic training.

Macklin will feel out opportunities to play professionally overseas or turn to coaching.

Junior point guard Rishonda Napier, who came to SIU the same year as Washington, said the four departing seniors will always be tied by their time in Carbondale.

“I’ll remember just the little things — the times in the locker room, struggling together during conditioning,” she said. “I came up with Azia, Cartaesha and Dyana, and Blair got here last year, but she quickly became part of the family. The everlasting friendship between the five of us is never going to change.”