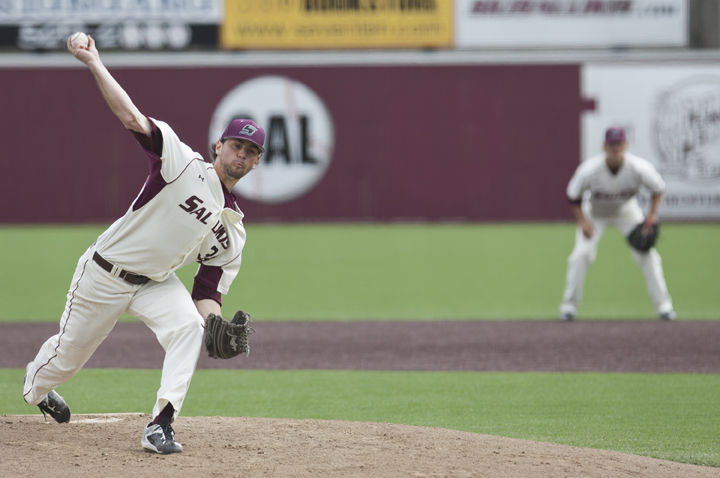 The game could not beat the rain, but Southern Illinois beat Murray State 5-4 in eight innings Wednesday.

SIU (15-9-1) used a three-RBI day from sophomore first baseman Logan Blackfan to win for the third time in four games.

The member of team personnel responsible for packing Murray State’s jerseys forgot to put them on the bus, and the Racers (12-16) were forced to play the first four innings of the game in T-shirts.

“I think it was funny more than anything,” junior third baseman Ryan Sabo said. “When we saw them show up without jerseys, we were just like, ‘Oh, Lord, what is this? Are we going to be able to play?'”

The game, which had been moved up three hours to avoid the rain that cut it short, started on schedule. Once Murray State’s jerseys arrived, its bats did too. A three-run rally in the fifth inning put the Racers ahead 3-2.

That lead would be short-lived, as the Salukis answered with three runs of their own in the bottom of the inning, highlighted by Blackfan’s two-run single.

“We had to respond there,” Blackfan said. “Especially in midweek games — there’s not as much energy going around, so any runs we can get are huge for us.”

The Dawgs, who entered the game with a Missouri Valley Conference-leading 25 double plays turned, executed three more twin killings behind their pitching staff.

Junior right-hander Connor McFadden got the start for SIU and pitched four innings of two-hit shutout baseball, striking out three batters and walking two to lower his earned run average to 3.52.

“People probably think we’re nuts, taking out a guy who’s thrown four innings, throwing a shutout and only given up two hits,” coach Ken Henderson said. “It was his first start of the year, and we were hopeful to get four good innings out of him. Fortunately, he gave us four great innings.”

Racer junior starter Austin Dubsky (2-3, 5.91 ERA) was saddled with the loss. He allowed four runs, two of them earned, on seven hits in 4.1 innings with one strikeout and one walk.

Freshman left-hander Seth Hackett earned his first career save with 2.1 innings of two-hit shutout baseball. He struck out one batter, walked none and picked two runners off first base, dropping his ERA to 1.46.

The Salukis will face Jacksonville State at 1 p.m. Friday at Itchy Jones Stadium. Junior left-hander Joey Marciano (2-2, 3.00) will take the hill for SIU.