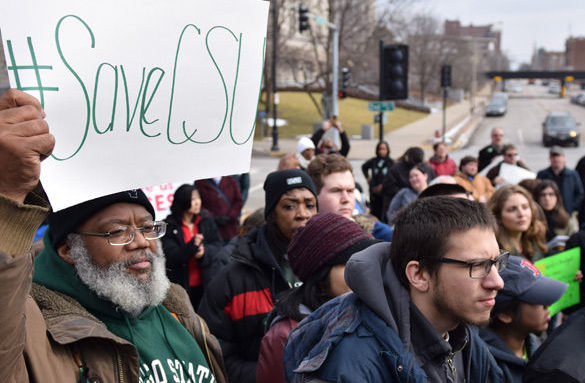 A protestor holds a #SaveCSU sign March 30 at a rally in front of the State Capitol in Springfield. (DailyEgyptian.com file photo)

In a dramatic sign of how Illinois’ budget crisis is affecting higher education, Chicago State University officials are telling all employees and students to turn in their keys.

The unusual request for employees to hand over their keys to campus buildings and offices by next week comes as the university, which serves mostly minority and low-income students, said it must prepare for possible widespread layoffs to begin as early as April 30.

The South Side public university, like all public higher education in Illinois, has not received state money for nearly 10 months as a budget impasse in Springfield shows no sign of ending. But the budget situation is most dire for Chicago State; it will not have enough money to cover payroll after April and could be forced to lay off a significant number of employees.

Unlike more financially stable public schools such as the University of Illinois or Southern Illinois University, about one-third of Chicago State’s budget – about $36 million – comes from the state, and the school doesn’t have a large enough endowment or cash reserves to keep it afloat.

“We have enough cash to make payroll through April 30, and then the operating dollars are no longer sufficient,” university spokesman Thomas Wogan said. “We are working toward a solution in multiple facets.”

In an email sent Monday to Chicago State deans, administrator Aleshia Renee Terry asked that department chairs begin collecting keys from faculty, staff, administrators and students “as soon as possible,” and explained the logistics for doing so.

“Every key must be collected including master keys and special lock keys,” she wrote. “We are attempting to complete the key collecting process by April 4.”

The directive comes at a precarious time for the university; it is walking a difficult line between conveying to legislators its dire financial circumstances while also convincing current students the doors will stay open and new students that they should enroll for fall semester. Indeed, the university announced Tuesday that it would open registration for the summer and fall semesters next week and that tuition would not increase next academic year.

Wogan said the request for keys is among preparations for impending layoffs.

“In preparation for that reality, logistical steps must be taken to protect state property, including collecting keys,” Wogan said in a statement to the Tribune. “These moves are necessary to ensure CSU will remain open and be able to continue operating through the summer and into the next semester.”

Wogan declined to explain how employees will access their locked offices, classrooms or laboratories after next week.

“We are working through it internally,” he said.

Illinois public universities and community colleges have gone without operating funds from the state since July after Gov. Bruce Rauner vetoed most of the out-of-balance budget Democratic lawmakers sent him. Since then, Democrats in the House and Senate have made several attempts to pass piecemeal spending measures to fund higher education.

Rauner vetoed the first bill to reach his desk, which would have funded community colleges and a state scholarship program for low-income students. He’s threatened to do the same on similar legislation under consideration. He has argued that there isn’t enough money to cover the extra costs, saying universities should cut administrative costs to free up money for operations.

Under the budget lawmakers passed last year, $1.9 billion was set aside to run universities and community colleges, a 6.5 percent decrease from the year before. Rauner had proposed a 31 percent cut for this fiscal year.

As money has dwindled, the state’s public universities and community colleges have laid off employees, instituted furlough days, stopped construction plans and cut sports programs. Moody’s Investors Service and other agencies have downgraded credit ratings. Low-income students at public and private schools have been told they have to pay for the state scholarships that had been promised to them.

At Chicago State, professor Laurie Walter said that asking employees to turn in their keys “doesn’t bode well for the summer and fall classes that they are talking about.”

“It is counter to the narrative they are trying to peddle,” Walter said. “I don’t think it does anything for morale. How are we supposed to tell students we will be here in the summer or the fall?”

Plans for layoffs have been underway for several months.

In February, Chicago State sent notices of potential layoffs to all 900 employees, about 300 of whom are faculty members. It also declared a financial emergency – known as financial exigency in higher education – to make it easier to fire tenured faculty, eliminate academic programs and take other extreme measures.

To ensure students could finish the semester and seniors could graduate, Chicago State canceled spring break and made plans to end the semester April 28 rather than May 13.

The board of trustees earlier this year appointed a committee to review and decide all employment actions, including layoffs.

Faculty Senate President Phillip Beverly said the latest directive about keys is another example of how the administration has behaved “appallingly bad” during the budget crisis.

“There has been very little consideration for the sort of human impacts of some of these decisions and their inability to answer questions,” Beverly said.

He said faculty have been told they wouldn’t be laid off until mid-August, and they will need their keys to access their offices, buildings and laboratories as they wrap up their research and complete the semester grading.

“It’s a fiasco,” Beverly said. “Will some people get their keys back? Does that mean you will have a job?”

The 150-year-old university already was facing a steep enrollment decline prior to the budget crisis. About 4,500 students are enrolled this semester, a 38 percent drop since 2009, records show.