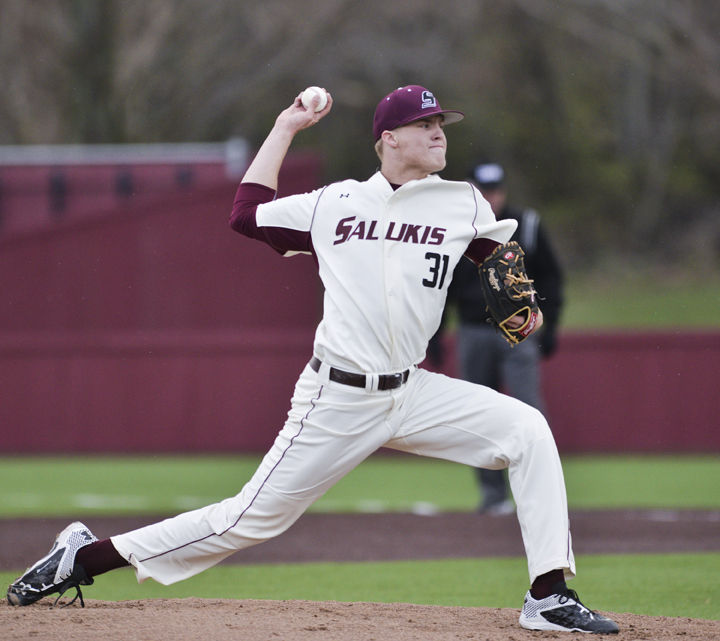 On March 21, 2015, Michael Baird, then a freshman relief pitcher for Southern Illinois turned in a dud of an outing, allowing four runs without retiring a single batter. Nearly a year later, he made the start of his career.

Baird came within three outs of a no-hitter against Illinois on March 20, striking out four batters and walking three in a one-hit complete game shutout, continuing a dominant sophomore campaign.

“Last year, one game I’d go out there and be lights-out and the next I’d be a completely different pitcher,” he said. “So it’s just figuring out what stuff I have that day and how to work with it, and it’s been working.”

Working to the tune of a 1.88 ERA — third in the Missouri Valley Conference. Baird’s 48.0 innings pitched rank first in the Valley, and he holds opponents to a .216 batting average.

While his teammates played on summer teams, Baird spent his offseason working at home to develop consistency and strength, based on instruction from pitching coach P.J. Finigan.

“[I was] just fine tuning my mechanics,” Baird said. “I had to get a little bigger and stronger over the summer, and slowing the game down and trying to learn how to pitch to hitters and not just throw the ball up there with whatever I thought was best.”

Teammates are noticing the work he put in during the summer.

“He went back home to Colorado and put on about 30 pounds of muscle,” said sophomore catcher Nick Hutchins, who has caught each of Baird’s starts this season. “It’s been paying off.”

At 6-foot-5, Baird is able to deliver the ball from a higher point than most other pitchers.

Finigan said that is a contributing factor in his dominance.

“It’s coming at a straight-down angle,” Finigan said. “And throwing as many strikes as he is, it forces people to swing the bat.”

Finigan said Baird’s biggest asset is his command. He has struck out three batters for each man he has walked this season, second on the team to junior righty Chad Whitmer’s 3.2:1 ratio.

Through his first five starts, Baird allowed one extra base hit.

Baird’s most recent start, March 26 against Memphis, he had his worst outing of the season. He allowed a season-high three runs on seven hits in six innings, a game that qualifies as a quality start.

He has allowed three or fewer runs in each of his starts and has pitched at least six innings in his last five.

Baird’s out pitch is his slider — a pitch he developed three years ago.

“I used to throw a curveball, but I couldn’t throw that for a strike,” he said. “My pitching coach in high school taught me the slider because I’m a max-effort type of pitcher. The curveball, you have to locate, but with my slider, you can throw it as hard as you want, so I switched my senior year of high school.”

Baird said he likes to go to the slide piece, which he throws with a “sideways two seam” grip, when he has two strikes on a batter as a put-away pitch. He uses it to complement his fastball, which reaches 93 miles per hour. Baird also mixes in a changeup.

Coach Ken Henderson said he does not talk to Baird on game days, allowing the lanky sophomore to maintain his intensity.

“He’s extremely focused and locked in, so you don’t see a lot of emotion from him,” Henderson said. “He keeps it pretty even. He’ll come into the dugout after a great inning, and guys will [say] ‘good job, good job,’ and he’s just in the zone. He does that with a lot of things he does. Even in practice, he’ll get zoned in, and he’s kind of in his own little world.”

As a freshman, Baird struggled through the first half of his first collegiate season. He allowed four runs or more four times in his first nine appearances, including a four-run, three-hit effort March 21, 2015, in which he did not record an out against Wichita State. His ERA in those first nine games was 12.98.

Starting with a four-inning relief appearance April 14, in which he allowed one run and struck out seven batters with two walks at SEMO, Baird posted a 4.39 ERA across his final nine appearances.

“I struggled through the first half,” he said. “I started to figure out and I realized against SEMO that I could have success here.”

Baird’s next start is scheduled for Sunday at 1 p.m. against Indiana State.