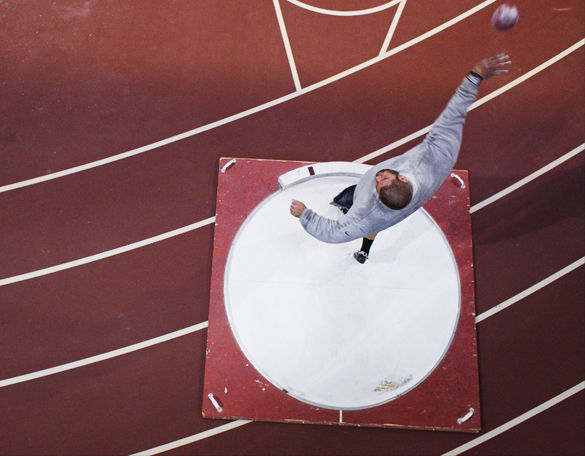 The SIU track and field team will send three men to the NCAA Indoor Championships beginning Friday, but one of them is fighting a major injury.

Senior shot putter Josh Freeman suffered a grade two sprain of his left ankle on Feb. 28 at the Missouri Valley Conference Indoor Championships. He stepped in a pot hole after exiting the team bus and two-and-a-half hours later he won his sixth MVC title with a throw of 18.29 meters.

“The trainers did a really good job of making sure when it swelled, I kept mobility so it didn’t stiffen up,” he said. “I think they said it was $4 or $5 worth of tape [to stabilize the ankle], so that was one casualty — besides my ankle.”

Freeman, who is wearing a walking boot on the injured ankle, said he is doing about eight hours of rehabilitation a day and team doctors told him the injury is healing faster than they expected.

For rehabilitation, Freeman said the main goal is to maintain mobility in the joint and keep inflammation away. He said he has been doing pool therapy — including simulated box jumps, lunges and side squats to build explosiveness — to avoid full body weight on the ankle.

The Fox River Grove-native said the ankle is about 70-to-75 percent healed, but as long as he is mentally ready, he should be able to perform his six throws at 2 p.m. Saturday.

“We’ve done a really good job of maintaining the mobility in the joint,” he said. “It definitely feels better than it probably is.”

Freeman has been able to return to a full practice, but soreness slows him down and his brain is the last obstacle to hurdle before he throws at the national meet.

“My brain won’t let me put as much weight as I want on it or turn as fast as I want to,” he said. “The more practices I can get under my belt before now and Saturday, the more comfortable I can get, and the more successful I’ll be.”

The injury has not changed Freeman’s throw at all, other than causing him to make sure he’s more careful of hitting his spots to avoid re-injuring the ankle.

Freeman said he hopes to throw 20 meters at the meet — something he has never done during the indoor season. He said if he can hit 20 meters, he would be happy given the circumstances.

Texas senior Ryan Crouser leads the nation with a throw of 21.73 meters. Freeman is seventh at 19.67 meters. The second to fifth competitors have also thrown more than 20 meters this season and the top-10 is within 2.28 meters of each other.

“It’s going to be about how close we can get it to 100 percent before this weekend,” Freeman said. “It’ll be how well the ibuprofen works and how well I can put one together on Saturday.”

Fellow senior thrower Brad Sauer will compete in the weight throw after winning his first career MVC title with a throw of 21.54 meters. He will be the first of three Salukis to compete at nationals when he steps in the ring at 5 p.m. on Friday.

Sauer is seventh in the nation with a throw of 22.06 meters, 1.83 meters behind Purdue senior Chukwuebuka Enekwechi — who leads the nation. Sauer said his biggest competition will be himself in the meet.

“Sure you have someone throwing next to you, but they don’t alter what you do,” he said. “I have to get out of my head, know that my body is prepared and let my body do the work.”

Sauer said he wants to break the Valley indoor record of 22.66 meters set by SIU throws coach J.C. Lambert in 2012.

The senior said Lambert has been pushing him to break the record.

“He’s been dangling it in front of me like, ‘You know you want it,’” he said. “He wants one of his kids that he’s been working with for years now to take it.”

Sauer said only focusing on weight throw for the last week and a half has eased his mind. He said not only is it nice having shorter practices, but less wear and tear on his body will pay off when it comes to nationals.

“It’s nice getting in there and focusing on one event and not expending energy on another event,” he said. “Knowing I don’t have to tear my body up [in shot put], I’ll be at a peak level for nationals.”

Conversely, junior jumper Kyle Landon said he would rather be working on multiple events during his preparation for nationals. He won the MVC title in high jump for a fifth consecutive time this season after clearing 2.25 meters, a personal best.

Landon also participated in the long jump and triple jump during conference but finished 116 and 222, respective, nationally in the events. The top 16 from each event make nationals.

“It’s been weird because I actually respond well to jumping another event before high jump,” he said. “It gets my muscles firing … it gets my body out of a lethargic state.”

Landon said his biggest competition will be Texas Tech senior Bradley Adkins who is tied for the national lead with a height of 2.29 meters.

The Chester-native said he wants to improve on last season’s indoor nationals in which he finished seventh with a height of 2.20 meters. He became the Salukis’ 150th All-American by doing so, and it was his only finish of the indoor season outside the top-two for high jump.

Landon will be the second of the three to compete when he jumps at 7:55 p.m. Friday.