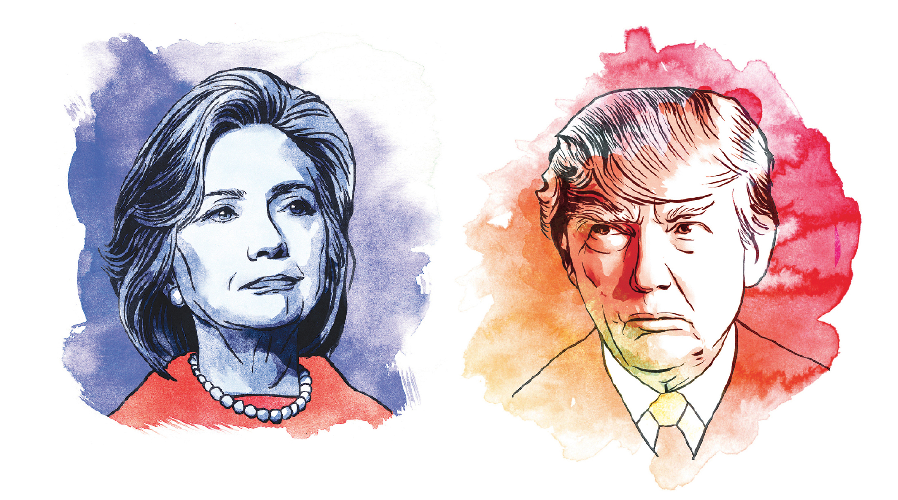 Huge majorities of Republicans and Democrats who cast ballots in the Illinois primary expressed worries over the nation’s economy, pointing to a fall campaign in which personal pocketbook issues in a financially troubled state could be key, exit poll results of voters show.

In addition, a significant number of Illinois Republicans indicated they’re open to an outside bid by a third-party candidate should Donald Trump and Hillary Clinton emerge as the two major-party choices in November, according to the results of voters surveyed for the major cable news and TV networks.

The look at the mindset of the state’s primary electorate revealed 93 percent of Republicans and 85 percent of Democrats were “worried” to various degrees about the economy, but they have vastly divergent views of who is best to turn the tide.

Among Republicans with economic worries, 39 percent sided with Trump, the businessman and reality TV star, 30 percent with Texas Sen. Ted Cruz and 19 percent with Ohio Gov. John Kasich to be the GOP’s standard-bearer in the fall — roughly mirroring the overall primary results.

Democrats with economic worries were equally split between former Secretary of State Clinton, who narrowly won the Illinois primary, and Vermont Sen. Bernie Sanders in their presidential preference.

It was another Clinton campaign — then-Arkansas Gov. Bill Clinton’s 1992 run for president — in which top aide James Carville popularized the phrase, “It’s the economy, stupid.” Now that adage may be replayed in contests up and down the ballot, reflecting wage and job stagnation from the Great Recession in Illinois, where unemployment remains above the national average.

One sign of how much the economy will play in the general election came when voters were given a list of top individual concerns.

A total of 48 percent of Democrats and 40 percent of Republicans cited the economy and jobs as their top individual concern. Among Democrats, Clinton got a 52 percent to 47 percent edge over Sanders. For Republicans, 35 percent picked Trump, 30 percent Cruz and 25 percent Kasich.

Ranking behind the economy and jobs among Republicans was government spending at 32 percent. For Democrats, it was income inequality — a major theme of Sanders’ campaign — at 23 percent, the exit poll found.

On the Republican side

Trump, the blunt-speaking and controversial front-runner, will face having to unify members of the GOP should he eventually become the party’s presidential nominee, the survey indicated.

As Trump has kept winning primaries, some establishment Republicans are pushing to deny him the 1,237 delegates needed to win the nomination. On Friday, the party’s 2012 presidential nominee, former Massachusetts Gov. Mitt Romney, said he would support Cruz in this week’s Utah caucuses and urged GOP voters in other upcoming states to do the same.

“The only way we can reach an open convention is for Sen. Cruz to be successful in as many of the remaining nominating elections as possible,” Romney said.

There also has been talk among some Republicans of pushing a third-party contender should Trump win the nomination. So far, however, it has been just talk, and the prospect of putting together a third-party bid is a vast, costly endeavor to appear on all of the states’ November election ballots.

Trump has been able to capitalize on GOP voters who are dissatisfied with the federal government. One-third of the state’s GOP voters said they were “angry” at Washington and of them, and half of them voted for Trump in the primary.

In addition, slightly more than half of Republicans in the state said they wanted a candidate who was “outside the [political] establishment.” And of them, two-thirds went to Trump.

One issue Trump has used to rally Republicans is making bold changes to the nation’s immigration system, including building a wall at the border to Mexico and having the Mexican government pay for it. But in Illinois, the poll found that only 9 percent of Republicans said immigration was their top concern, trailing terrorism concerns, cited by 17 percent of GOP voters.

And while Trump and other Republicans have talked boldly of sending people who have immigrated illegally to the United States back to their home countries, a majority of Illinois GOP voters — 56 percent — favor a path to legal status, a concept party regulars decry as “amnesty.” Only 4 in 10 said the favored deportation to a home country.

But concerns about mixing immigration and terrorism exist among Republican voters. Fully two-thirds of Illinois Republicans support Trump’s call for a temporary ban on Muslims entering the country, and 29 percent oppose it.

Top Illinois Republicans, including Sen. Mark Kirk, have criticized Trump’s proposed Muslim ban. But national security has emerged as a top campaign selling point in his re-election battle against Democratic Rep. Tammy Duckworth this fall and Kirk has called for a temporary ban on refugees from war-torn Syria amid terrorism concerns.

On the Democratic side

As for Democrats, the poll indicated only minor party healing would be needed in Illinois if Clinton was the nominee. Only 27 percent said they would not be satisfied if she won the nomination, virtually all of them Sanders’ supporters.

Still, 54 percent said Sanders was the more inspiring candidate about the nation’s future, compared with 45 percent for Clinton.

A related split was found when it came to single and married voters, who cast Democratic ballots about equally in the state. Of married Democrats, 56 percent sided with Clinton and 43 percent for Sanders. Single Democrats sided with Sanders, 59 percent to 42 percent.

About one-third of Illinois Democrats rated honesty as a top candidate trait, more than those who chose someone who cares, experience and electability. Of those who selected honesty, Sanders captured 7 in 10 voters, again reflecting similar feelings of voters in early states who have concerns about Clinton.

Clinton gained huge percentages among the quarter of Democrats who rated experience as a top candidate quality as well as among the 13 percent who preferred electability.