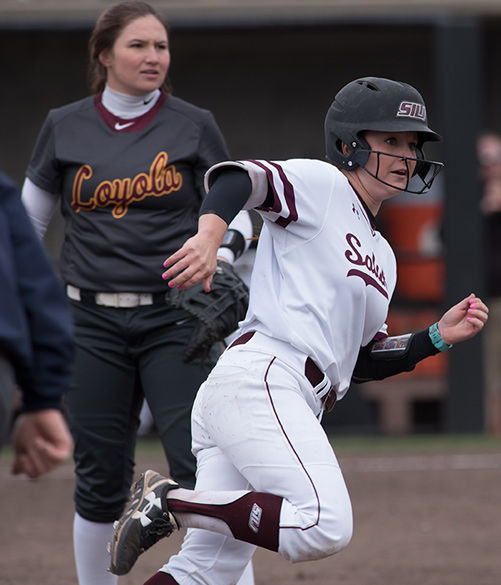 Power surges have been coming to Charlotte West Stadium this season.

Saluki softball has hit 25 home runs in 25 games after having 18 through 25 games last season.

With its current home run per game pace — best in the Missouri Valley Conference — the team would finish with 52 home runs on the year, the most since the 2007 team that made the NCAA tournament.

“We’re working on hitting line drives and ground balls,” she said. “If you hit one out where you square up a ball, that’s great.”

Most of the resurgence in power comes from the bat of junior first baseman Shaye Harre.

She has already set a career high with eight home runs on the season and is nearing her career total of 10 from the previous two seasons.

Blaylock said before the season that Harre always had the ability to hit more home runs, but the first baseman reinforced the coach’s point that they haven’t been the focus of her at-bats.

“Not home runs, just hitting line drives,” she said. “If they end up going out, then they go out.”

Harre said she has not adjusted her approach at the plate, but her increased production is a culmination of her previous years of work.

Home runs are only part of the power equation; Saluki batters have hit the gaps in the outfield as well.

Freshman outfielder Eyrika Brandenburg leads the team with two triples and is tied for fourth with four doubles — even with a different approach.

As a slap hitter, Brandenburg strides out of the box to get a running start at both the ball and first base on her swings.

Even though she’s a slapper — typically not a power hitter’s norm — she said she gets extra-base hits with a combination of her power and her speed.

“I’m too slow to be a soft slapper,” Brandenburg said. “I just like to slap with power instead of softly tapping it.”

By being in a consistent hitting position, with her crossover step in her running start of a swing, she pushes off her leg to get the power necessary for extra-base hits.

Being a powerful slap hitter is a new trait for Brandenburg as she said she’s just recently gained the ability this season after only hitting one home run in her career.

“Since I came to SIU I learned how to hit for power better,” she said. “I used to struggle with the inside pitches, but now I can even hit those for power too.”

Brandenburg is third on the team with 31 total bases, even though she admitted she’s not incredibly fast.

Regardless of whether it’s a slapper or traditional hitter, Harre said there is a key to getting hits in the outfield gaps or home runs.

“Just staying through the [strike] zone is the biggest thing,” she said. “If you’re in the zone longer, you get more time on the ball so that’s just the thing to do.”