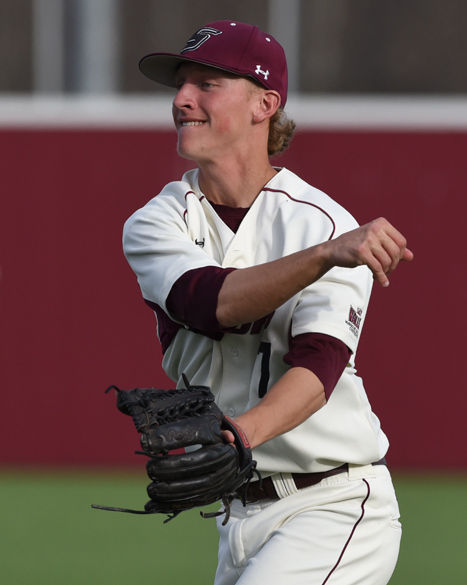 The game ended with a two-out RBI single from sophomore second baseman Connor Kopach in the bottom of the ninth — his second RBI of the game.

He hit the low and inside fastball toward the shortstop, who was able to get a piece of the line-drive, but was not able to make the third out and the ball rolled into left field.

“I was just trying to see a fastball and put a good swing on it to find a gap,” Kopach said. “We finally found a way to pull one out, so it feels good.”

SIU had lost its last two extra-inning games and tied another before Saturday’s win.

The winning run was scored by catcher Nick Hutchins, who pinch hit for freshman designated hitter Jared Schmidt in the ninth inning. Beforehand, Schmidt tallied his first career hit and run in the second inning.

In his only at bat of the day, Hutchins was able to notch a single off of a slider from the unique style of Neilsen.

Because Hutchins was the Salukis’ only backup catcher, coach Ken Henderson was not able to pinch run for him once he reached scoring position.

“I was thinking ‘I hope we don’t get a base hit right at them, and then he can’t score,’” Henderson said. “Fortunately, it was in the gap and it wasn’t an issue. It was great resolve by our kids and we finally had something go our way.”

This was SIU’s first win since March 11 against St. John’s when the team won 6-3.

“[Coach P.J. Finnigan] thought it would be a good matchup for me,” Selvey said.  “I felt really comfortable with [senior catcher Taylor Martin] back there, we were on the same page. And when you have our defense behind you you just have to flip it in there and let them do the work.”

He and Martin also picked off an Illini baserunner in the seventh and ninth innings. One on a snap throw from Martin, and the other on a pick-off move by Selvey that was signaled by Martin.

“It was good timing,” Selvey said. “It was a big time in the game to have that called — just another reason we were on the same page.”

Both starting pitchers gave up two runs early but settled down in the middle frames. Twelve straight batters were retired by each pitcher between the third and sixth innings.

The Illini lost their first game of the doubleheader to the Northern Illinois 9-3 after a 5-3 win over the Huskies Friday.

SIU will play a doubleheader starting with NIU at noon Sunday and ending with a 3 p.m. matchup versus the Fighting Illini at Itchy Jones Stadium.