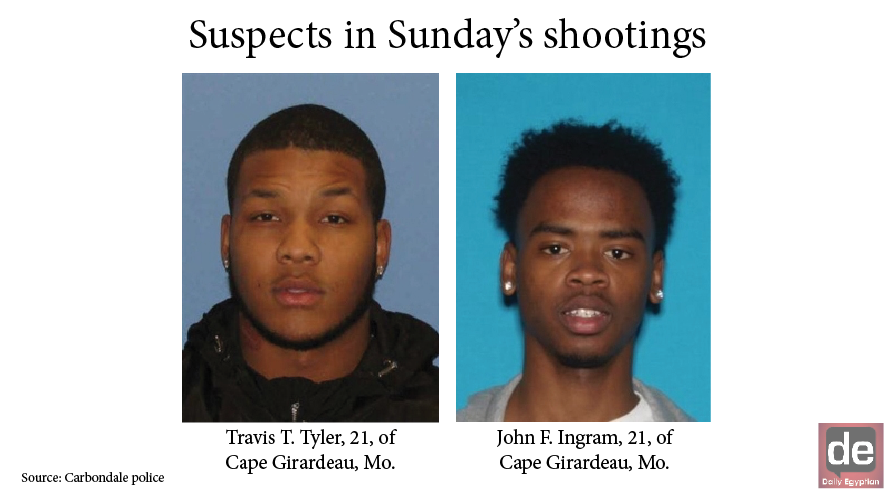 Another suspect wanted in the Easter Sunday shooting that left one man dead and put another in the hospital has surrendered himself to police.

Southeast Missouri State University student Travis Tyler, 21, of Hazelwood, Mo., turned himself in Monday at the Jackson County Jail in Murphysboro, according to a Carbondale police news release.

Police responded to reports of shots fired about 2 a.m. March 27 in the 400 block of West Walnut Street. Upon arrival, Carbondale police said a large crowd of people leaving the party there. Investigating officers learned an altercation between two men at the party led to the shooting. Shots were fired inside and outside the house, police said.

Tim Beaty, 41, was killed by a stray bullet in his home next door, police said during a press conference March 28. A second victim, Nehemiah Greenlee, was taken to Carbondale Memorial Hospital for a non-life threatening injury and later transferred to a St. Louis-area hospital where he was treated, police said.

SEMO student John Ingram, 21, of Webster Groves, Mo., also turned himself in at the Jackson County Jail on Thursday. He was arrested on two active warrants for aggravated battery with a firearm and aggravated discharge of a firearm.

Ingram is due in court Monday for a bond hearing, according to a news release from Jackson County State’s Attorney Michael Carr.

SEMO student Dwayne Dunn Jr., 21, of St. Louis, was the first suspect arrested and charged with reckless discharge of a firearm in connection to this case. His bond was set at $500,000 by Judge Kimberly Dahlen on March 29 and a preliminary hearing is scheduled for April 21.

The three SEMO students were placed on interim suspension and are not allowed on university premises pending the completion of a criminal investigation, according to a SEMO news release.

The charges against Tyler and Ingram are related to injuries sustained by Greenlee. The investigation into Beaty’s death is ongoing, Carr said, and no charges had been filed as of Sunday.