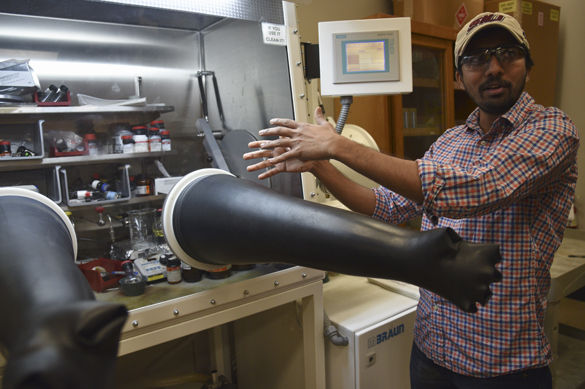 From the electricity that travels through power grids into homes, to batteries in phones which keep people connected, energy is essential to maintaining the function of everyday life.

To educate people about where this energy comes from and how it can be used more efficiently, SIU celebrated its first Energy Day on Wednesday by hosting an event that explored new technologies in the field.

MORE: Our images from Energy Day

Here are some of the important topics covered:

The future of solar energy

Kyle Plunkett, professor in the department of chemistry and biochemistry, and his team in the organic chemistry lab are working on creating organic materials that could be used in electronic devices.

Their work focuses on separating and purifying these materials from base solutions to create semiconductors, which can be used to conduct electricity.

One of the most promising applications is to use these semiconductors in organic solar panels. While these materials are not quite as efficient as synthetic ones, they would drastically cut down production price, researchers say.

“With these materials we could print solar cells like a printing press prints newspapers,” said Sam Bheemireddy, a fourth-year doctoral student from India working with Plunkett.

The applications of these semiconductors is not limited to solar panels though. Flexible LED screens could also be produced that would create a new market of devices, he said.

The future of coal

Yanna Laing, associate professor for the department of civil and environmental engineering, and her laboratory are experimenting with mixing a specifically designed solution with ground coal to create methane gas that can be used as a source of energy. When burned, methane is more environmentally friendly than coal.

In a world focused on reducing emissions but still grounded in coal, she said finding new uses for it is crucial.

“All sources of energy are going to be relevant in the clean energy economy of the future,” said Christopher Smith, assistant secretary of fossil energy for the U.S. Department of Energy. “Finding ways to reduce the impact of coal production is going to be critically important for environmental sustainability in the United States.”

SIU’s impact on a global scale

Smith, who manages the largest oil reserves in the world, addressed a nearly full auditorium about the foreseeable future of energy in the world and the position the U.S. should take.

Smith said even if all 190 countries follow up on their strategies, it will not be enough to avoid a 2-degree warming of our planet.

“We have number of collaborations between this university and the national energy technology laboratory, which is the national lab that does fossil energy technologies, so we do a lot of work here in southern Illinois,” Smith said. “The work that we envision, that we think of, it gets done here in programs like this one.”

Smith said the energy problem is difficult to solve because of the large scale, slow pace of progress and coordination between all sectors in different places around the world, but progress is being made.

The U.S. must be one of those countries leading the way in energy, he said.

“It is those countries that build, that create, that innovate, that invent, that invest in their universities, that invest in their intellectual capabilities and come up with solutions that ensure we’re able to meet our energy needs in the future,” Smith said. “An important part of that is making sure that we use all forms of energy; wind, solar, biofuels and importantly, coal and natural gas. My concern is not that we are doing too much, but that we are doing too little.”