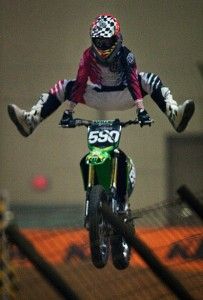 Exhaust filled the cavernous dome of the Southern Illinois Center as fans crowded the high-rise bleachers Saturday for the sixth annual Mid-America Arenacross in Du Quoin.

Hundreds of dirt bike riders from 26 different classes competed early Saturday morning in an attempt to qualify for an evening race of 250 people. Participants age 16 and up rode late Saturday for an open professional payout, one of the most experienced classes, with a purse of $1,000.

Motocross can be an expensive sport in a decade of climbing gas prices, and race manager Steve Ezell said in the past three to four years the event has suffered at the hands of a bad economy. Despite dropping 4-wheelers from the race this year due to insurance reasons, the event has remained popular, with more than 200 participants each year, he said.

Ezell worked with Bass Productions, an organization that holds motocross races throughout Illinois, Missouri and Kentucky, to put on the event.

Professionals are not the only ones who compete in the event. Participants as young as 4 and as old as 60 pull on helmets and head into the arena.

“This event is a stepping stone for kids trying to get into the pro classes,” Ezell said. “This is where a lot of young kids come to learn how to race, and a lot of veteran riders come out for their love to race.”

Ezell said the combination of southern Illinois’ variety of quality riders and Du Quoin’s central location to racing hotspots throughout Kentucky and Missouri make the Southern Illinois Center a prime place for riders to meet up for the weekend, park their RV’s on the vacant fairgrounds and enjoy the community of race fans from all around the Midwest.

Brian Huckstep, a 25-year-old rider from Cape Girardeau, Mo., said he’s been riding for 14 years and has made the trip to Du Quoin since the races began six years ago. Huckstep said there were 16 racers in the event from Cape Girardeau County, and the increase of motocross popularity in his part of Missouri reflects a trend throughout the country.

Despite the entry fees, the cash prizes and the costly nature of the event as a whole, Arenacross serves as an outlet for motocross fans to come together in competition and communion. Where they go, restaurants and other businesses in the area also benefit.

“Racing is expensive,” said Huckstep. “Whenever riders go somewhere to race, they pump a lot of money into the local economies they visit.”