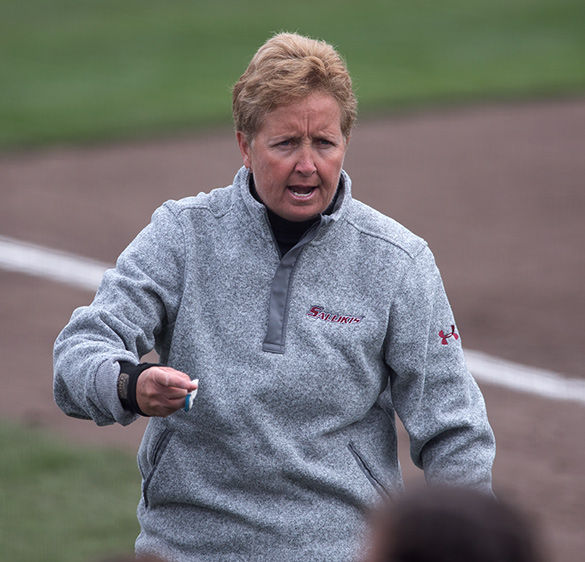 In a battle of two undefeated teams in conference, the Salukis fell short.

Drake sophomore pitcher Nicole Newman (14-5, 2.26 ERA) was back to her dominant ways in game two after shutting the Dawgs down in the series opener.

Newman thew a complete game, one-hit shutout in game one’s 4-0 win, collecting 13 strikeouts and five walks while hitting two. She finished the series with 25 strikeouts in 14 innings. She leads the Valley with 149.

The Bulldogs got Newman an early lead with one run in the bottom of the first inning. Freshman third baseman Taryn Pena connected with a two-out single that scored sophomore second baseman Kelsey Wright, who led the inning off with a walk.

The Salukis had a chance to tie the game in the next half inning as they loaded the bases on two hit by pitches and a walk with no outs. The next three batters combined for two strikeouts and a pop out.

Drake also loaded the bases in the third and fourth innings. SIU sophomore starting pitcher Savanna Dover (4-6, 3.68 ERA) worked her way out of the third inning jam but the Bulldogs scored three runs in the fourth.

Pena added her second RBI of the game with a bases loaded walk and sophomore designated hitter Kailee Smith followed with a two-RBI single to center.

Dover lasted another two-thirds of an inning before being pulled for freshman pitcher Nicole Doyle.

Dover finished with four runs allowed on four hits, nine walks, one wild pitch and one hit by pitch while collecting five strikeouts in 4 2/3 innings.

Doyle finished the game by allowing two hits in 1 1/3 innings pitched and fanning one batter but Newman shut the Dawgs down for the remainder, picking up four strikeouts in the last seven batters faced.

SIU failed to convert on opportunities in the series finale and dropped game three 5-3 to Drake.

The Dawgs had their first multiple-run inning of the weekend in the seventh, but it wasn’t enough for the comeback. Sophomore third baseman Sydney Jones singled in a run, her second RBI of the day, and senior designated player Caylee cook singled in another in the final frame.

SIU got a run back immediately with an RBI single from Jones. She scored senior shortstop Kelsey Gonzalez, who started the inning with a double to left field.

Senior starter Mariah McKinnon (5-5, 5.94 ERA) retired 10 straight batters after Jones’ single. She finished the game with 5 2/3 innings pitched, allowing one run on six hits and one walk while striking out four.

SIU stranded nine runners in the game, which didn’t help freshman pitcher Brianna Jones (15-5, 1.64 ERA) who picked up her second loss of the weekend. She allowed five runs — four earned — on eight hits, two walks and one batter hit in six innings. She collected four strikeouts.

The Salukis continue their travel in a mid-week game against UT Martin at 4 p.m. on Wednesday in Martin, Tenn.