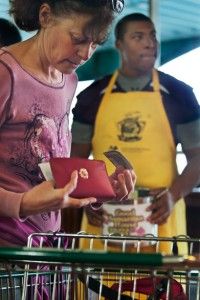 SIU’s football players stationed themselves in front of  five Carbondale grocery stores Saturday from 8 a.m. to 4 p.m. to collect money for the fifth year in a row. The team’s goal was to raise more money than last year, and that’s exactly what it did. The Super Bowl benefit saw almost $2,000 more than its $4,000 dollar profit in 2011.

Associate Athletic Director Kristina Therriault, who has helped to oversee the event since it was created, said the football players tend to draw in the attention necessary to create the area’s largest benefit for the Good Samaritan House.

According to the ministry’s website, the Good Samaritan House was established in 1985 by the Carbondale Interfaith Council to provide services for area people in need. The Carbondale facility provides an emergency shelter, a transitional housing program, a soup kitchen and a food pantry.

Football players’ DJ Cameron and Q’Niko Thomas, both freshman safeties, stood behind the lanes of the Neighborhood Co-Op as shoppers in route to the door gave donations.

“They put a sign up sheet in the locker room, so most of us doubled up for shifts and planned on switching out every couple of hours,” Cameron said.

The two said the event is strictly volunteer, and that signing up is usually a given because of the considerably small amount of effort needed to greatly contribute toward the betterment of the community.